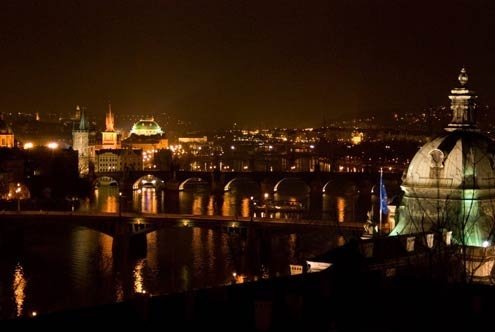 nto Prague’s night our plane descended. It was Christmas Eve and time for dinner. While Czechs were tucked warm inside their houses, slurping carp soup and other delicacies, Simon and I headed to the only open restaurant near our hotel: U Kalicha (Na Bojisti, 12-14). From the chilled silence of the freezing night we entered the smoky rowdiness of our first Prague experience.

Just as the occasional accordionist makes the rounds in Rome playing the classic “O sole mio,” so inside U Kalicha big greasy soldiers sing and play accordion and tuba. We stuffed ourselves on food that after it had been cooked seemed doused in yet more oil.

To prepare for my trip to Prague I had returned to Milan Kundera’s “The Unbearable Lightness of Being,” a novel I recalled had once annoyed me, but I couldn’t remember just how. Still, I thought Kundera’s portrayal of Prague under communism and during the 1968 Prague Spring might serve as a useful starting point to absorb his now very capitalist city.

While Simon and I walked along the wide Vltava River on Christmas morning, I began scanning the landscape for Communist-era buildings. People were out strolling in the slanting sunlight, feeding the swans. The latent air of holiday-time slung through the streets. We wandered aimlessly.

Only after an hour, the cold got to us. Luckily the Café Slavia (Smetanovo nábrezí, 1) turned up around a corner, and its large windows and spacious, art deco interior all but inviting a cozy break. The café — kavárna in Czech — is where Kundera and Kafka are said to have once sipped coffee (but not together). I was quick to do the same. It’s easy to imagine, in a city of such literary heritage, tables covered in papers, air filled with cigarette smoke, brows bent in concentration and raised in daydreams.

Then, along the road we left on, came the first Communist structure. It wasn’t very different from Rome’s Fascist buildings, though the allegorical reliefs preach ideological messages that have little in common. The straight, staunch lines and lack of additional adornment stand out in a city rife with Gothic spires and Baroque saturation.

Following my historical curiosity a step further, I later visited the city’s small Museum of Communism (Na Príkope, 852/10). Seeing the small museum signs amid so many flashier ones made it seem like we were headed for a casino. The museum is located on a main shopping street off Wenceslas Square between a Benetton and a Diesel, already enough of a contradiction.

The Museum of Communism packs considerable information and period-piece relics into a space the size of a one-bedroom apartment, complete with schoolroom, interrogation room, and Communist-era corner store. The placards were faded and the relics were dusty, but all that seemed part of what the museum sought to convey. We can’t have a clean, modern Communist regime, now can we?

The exhibits did manage to answer my questions — How did Communism take hold? What was it like? How did it fall? — as well as providing me with a lasting visual impression, including gas masks (in case of American terrorist attacks) and images of the massive monument of Stalin that overlooked Prague from Letná Park until its 1962 demolition.

Another small museum I visited was dedicated entirely to Kafka. On one rainy evening, after watching more swans being fed (a frequent scene), we took shelter at the Franz Kafka Museum (Cihelná, 2b), located near the river on the Castle side. Kafka was a member of Prague’s pre-war, German-speaking minority, which explains why some mistakenly know him as a German writer, and not a Czech citizen (Adolph Hitler justified his annexation and later invasion of Czechoslovakia based on assisting minority Germans). But the museum makes it clear Kafka’s writings were born from the city he grew up in. My most lasting impression was the hall of filing cabinets reminiscent of the bureaucratic nightmare chronicled in “The Trial.”

It was difficult to shake off the fabulous, eerie, magical cityscape that Kafka once imagined. The half-light of the dreary evenings settling over the river, the shadowy, skeletal trees, and the towers built from brick turned black with age, all of it seemed loaded with an extrasensory presence.

By the end of the trip, even the city center didn’t look the same, though the cheerful Christmas Market churned on serving hot wine, potatoes and sausages. We crammed into the Old Square with the crowds to get warm, sipping cup after cup of hot wine and eating one sausage after another. Add that to the strange mix of impressions spun from Kafka, Kundera, and Communism, and I returned to Rome with a Prague of the mind that won’t go away any time soon.

Flying to Prague from Rome or any other Italian city is easy via Czech Airlines or Wizz Air. Both offer nonstop service from Rome’s Fiumicino to Vaclav Havel Airport, a 30-minute bus ride away from Prague’s center.

Hop on the 119 bus to the Metro A line, which runs frequently throughout the hour and costs 40 CZK (or about €1.50). You can also catch the Airport Express in the same place outside the arrival hall. It stops at Metro A as well as the main train station and costs 50 CZK (about €2).