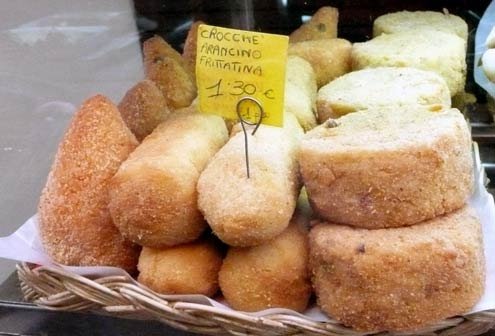 ay or night, the potato is among my favorite comfort foods. Growing up in the United States, I always treated myself to hash browns or country-style fried potatoes as a hearty breakfast side course. With a meat entree, heaven was a baked potato with sour cream and chives. Sitting around with French fries or potato skins and cheese put a great nighcap on a long night of partying.

In Italy, my potato passion has found new outlets. When I’m feeling down, I’ll go to my local trattoria and order hand-cut fries cooked to order and served with sea salt. Or boiled potatoes served in salad dressed with olive oil and vinegar. Serious hunger makes me go for feather-light potato gnocchi with ragú and parmesan cheese. Meanwhile, tortelli di patate, potato-filled ravioli from the Mugello region above Florence, are great for a special occasion. Italian-style mashed potatoes — lumpless puré di patate — can also be ideal side dish for a pot roast and other meat-rich dish.

At home, I keep a bag of potatoes is in the kitchen in case of emergencies. A potato dish is usually easy to fit in since Italians usually include two or three vegetables at a meal.

Naples has a unique outlook on potatoes, as I learned on a recent trip. Who, for example, would serve potatoes and pasta together, a double-carb shot? They do in Naples. Pasta e patate, a soupy bowl of mixed pasta topped with cubes of smoked mozzarella, is an Italian variation on Mac and Cheese.

Naples street food is dominated by pastries and the potato makes its appearance in a lighter-than-air doughnut known as graffes (a corruption of krapfen, or German sweet donut) as well as in potato croquettes.

But the most famous preparation is probably the gatto’ — no, not a cat — but rather a concoction that derives from the French word gateaux, or torte. Riced potatoes are mixed with eggs and the torte is then layered with ham and cheese. It’s baked, cut into smaller portions and served at room temperature.

I often use potatoes instead of cream to thicken soups, a wonderful trick I learned from Fabio Picchi of Cibreo Ristorante in Florence (Via Andrea Del Verrocchio, 5/R; tel. 055.234.5853).

The potato has been on a lot of minds lately. The United Nations named 2008 the International Year of the Potato. Rich in starch, potatoes are the fourth most important global food crop — more than 325 million tons were grown in 2007, with China leading the way.

Cultivated in the Peruvian Andes by the Incas for millennia and brought to Europe by all-conquering Spanish explorers, potatoes were hardly an instant hit. Their blossoms got them into botanical gardens faster than into kitchens. French chemist and botanist Antoine-Augustin Parmentier changed the lay of potato-land in 1773, when he won a prize for introducing the potato as a source of basic nourishment. He learned first hand: Imprisoned by the Prussians, he was fed only potatoes.

Before that, potatoes were consumed only by Ireland’s poor. In fact, Ireland’s reliance on the root was miserably highlighted when a four-year famine between 1845 and 1848 led to tens of thousands of deaths and mass immigration to the United States.

Today, there are more than 4,500 varieties of potatoes, 3,000 of which come from Peru, where it all began. Italy, which first knew the potato as tartuffoli, now produces 1.8 million tons annually.

These are excellent with pesto or ragú. Remember to cook a test gnocchi before rolling them all out!

— 2 lbs. potatoes (I use a smooth-skinned Yukon Gold style).

• Boil unpeeled potatoes in salted water. Cook until tender, about 45 minutes. An undercooked potato will ruin this dish.

• Peel potatoes and rice or mash.

• Roll out long, cigar-like ropes, no thicker than a finger. Cut into 1/2 inch slices.

• Roll on fork prongs to form ridges pressing your finger lightly into one side to form a belly button.

• Place prepared gnocchi on a floured towel until ready to cook. Bring salted water to a boil. Lower heat to medium. Drop in a gnoccho to test. It will fall to the bottom, and when cooked, rise to the top. If it dissolves, or the gnocchi seem slimy or too soft, add more flour to the dough.

• When the gnocchi float to the top, let cook 10-20 seconds and remove with a perforated ladle to serving dish.

• Layer with hot sauce and serve with parmesan cheese.

This classic recipe is made in the tradition of risotto, using tiny broken pasta pieces called pasta mista.

• Peel potato and cut into small 1/2 cubes. Add a minced clove of garlic in olive oil and sauté together. Stir to prevent sticking to the bottom of the pot.

• Add the pasta mista (if you can’t find this, you can break up spaghetti or use a small macaroni. Add more water and cook over low heat, stirring occasionally.

The pasta is done when the potatoes are cooked. There should be some liquid left in the pot. Off the heat, add the cubes of smoked provolone, grated Parmesan cheese and grated pecorino Romano. Let rest and stir again. This is best eaten with a spoon.

• Cook the potatoes and mash or rice.

• Mix well and whisk to blend.

• Put half the mixture, cover with the mozzarella slices.

• Layer the remaining mixture on top.

• Sprinkle with breadcrumbs, dot with butter and bake at 200C for 40 minutes.