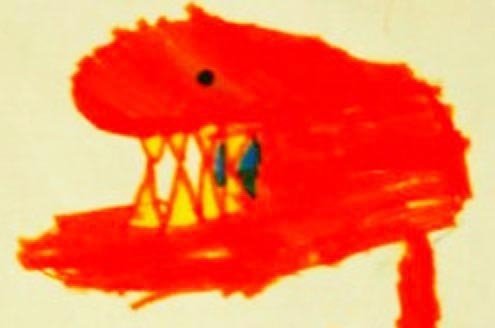 Dinosaurs can be extremely demanding.
M

y most memorable boyhood art was crayon drawings of toothy dinosaurs and giant sinking ships. This landed me with a child psychologist.

A psychotherapy devotee, my father worried I might be antisocial, apocalyptic or, worst still, apoplectic. In my household, to constantly “lose” your homework meant somehow involving Freud, a man I didn’t know but whom my father insisted knew a great deal about me.

My mother opposed the psychologist idea, or seemed to: She sighed a great deal. If only the sighs came with a translation manual.

Freud also stirred when I was caught shoplifting. Particularly when I explained the deed as a form of personal transportation. The toy soldiers, I explained, liked me more than the store and needed my help to find a new and more suitable home. I was only happy to oblige.

For my father, the flaming volcanoes and sinking ships were really sublimated or salivated feelings, which delighted me since both sounded like submarines. If only he know how much work salivation required, in particular big teeth, something portrait-hungry dinosaurs fussed over. Most wanted their drawings in hurry, hard work for a small, overtaxed artist. Since the dinosaurs refused to discuss these demands with my father, telling me the problem was mine and mine alone, I ended up with Doctor Yurt.

Doctor Yurt was actually my second doctor, since the first, Doctor Crow, had made suggestions my father didn’t want to hear, namely that I had delinquent tendencies that required immediate “reforming” — all this because of dinosaurs and sinking ships (and stealing the doctor’s clock since it also seemed to me to need a better home).

I named the doctors for what they reminded me of: Doctor Crow had a beak nose and Doctor Yurt looked like a man whose last name began with the letter Y. Yurt came to mind since he a painted likeness of a bulldog on the wall, with a “Y” over its snout. This was a promising sign since Bulldogs had once been dinosaurs until stupid nature intervened.

Doctor Yurt asked me questions, as in why did I steal, which I explained through my new home theory. Why then did I draw dinosaurs? Because, I told him, they asked me, and I had to be polite. What about the sinking ships? I liked ships but they tired me out by being so constantly horizontal. Making them vertical, like a dinosaur neck, gave the world greater logic. Why didn’t I do my homework? Because, I sighed, the dinosaurs and sinking ships demanded otherwise, not to mention the toy soldiers in need of freedom and new homes.

Ah, said Doctor Yurt, who wrote all this down.

Doctor Yurt then asked me if I wanted to be on a sinking ship, which seemed like an exciting prospect so I immediately nodded. So long as the ship had crayons, I added. That way I could record the event for posterior.

I saw Doctor Yurt for one month. In that time I made friends with his secretary, Miss Lips, who had pretty ones. I often thought of the bulldog with the Y.

When my time with Doctor Yurt ended he shook my hand and wished me well. I offered to draw him while sitting on sinking ship but he declined.

My father told me Doctor Yurt had reported I was obsessed with death and mortality (leaving out posteriors and bulldogs). My pictures, added my father, were actually surrogates for my fear of mortality, which was manifest in the images of dead beasts and disaster. I had to stop.

But what about the dinosaur demands?

I must turn them down, with regret, said my father creatively. It was up to me to take the initiative. This I liked, though it scared me.

Try telling a triceratops you can’t draw it because you have too much homework. But I did, and the triceratops was surprisingly patient, even sulking at times. Some ships agreed not to sink until I was around to draw them. And a number of toys, unused, hinted privately that they’d preferred life at the toy store.

All this was what my father called a chastening, which sounded like a nut.

I instead called it what it was, grumpy, but my homework was pleased, and when I finished doing it I went right back to dinosaurs and sinking ships, to give mortality’s posterior a chance.