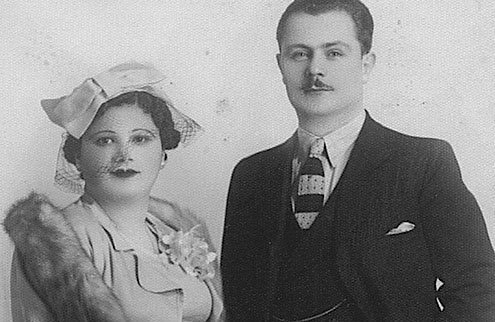 y mother warned me not to get overly excited after Fabio proposed. “Wait till you set the date. Then it’s official,” she said.

Hers wasn’t idle wisdom but real-life experience. For her, putting a ring on a woman’s finger is the easy part. Locking in “the date” takes the ballgame up a notch. My mother and father were engaged for five years before making it to the altar. “I just wanted us to be sure,” my dad now jokes.

To be fair, Fabio and I have already discussed two possible time-frames for our 2008 wedding, August or December.

But before setting things in stone, Fabio faces an issue that has nothing to do with his youth or manhood: his sister.

His sister, you see, is also planning a wedding — about the same time we are. Fabio’s parents want her “taken care of” first since she’s a woman… and what was the word they used? Oh yeah. Debole (weak).

Come to think of it, I wonder how his sister would respond if she knew she was being called weak in family circles.

Not exactly flattering, I must say. But since she’s four years older than I am (I’m 29), they think it’s only fair she gets a head start on childbearing.

To some extent, I see their point. Still, I couldn’t help the urge to get the marriage ball rolling. With her planning, that is. By the looks of it, my big day depended on hers. So I did what any girl in my shoes would do. I wasted no time pressing her for information during our recent vacation time together.

My interrogation started in the car ride on the way to the airport.

So when were they thinking about it? “April or June,” she answered.

My face lit up. But then she paused. “Then again, September might be nice too.”

In the same breath, she said it was up in the air until she got the results back from a key exam. She’s studying to be a judge.

Then, of course, there was the planning to think about. Who could help her? Her mom was in Calabria, and according to Fabio’s family it’s best to keep men out of planning as much as possible. “Dragging them to 101 appointments is not exactly the best introduction to marriage,” his sister explained. “It’s best to work through a process of elimination and then bring them in when needed.”

Make no mistake, the men may bring home the bread in this family, but the women run the show and the household. Naturally, I quickly volunteered to offer my services. Not just to serve my own interests (I mean, I will have to go through the same steps) but also to show that I’m a good future sister-in-law.

She gave it some more thought. “But you know, Mario never gave me a ring. So technically…” I chimed in, “Ahhh. Ring Schming. That’s so overrated.”

OK, so I lied. But then again, engagement rings aren’t as common in Italy as they are in the United States. So, we agreed to start our planning as soon as her exam results were in.

Until then, please cross your fingers!