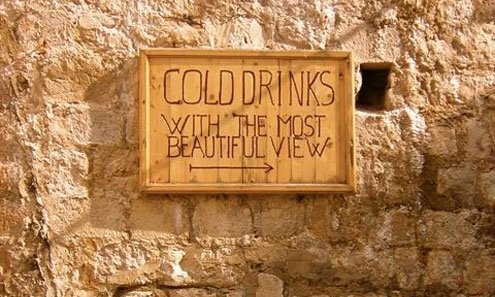 Promises, promises... You have to work to find the charm. Photos by Ingrid Williams.
T

he last time I went to Croatia, no one checked my passport. This time, things were a little different, and the passport check was just the beginning. Three years ago, my husband was still my boyfriend and our Croatian vacation was a last-minute adventure.

In Split, we bartered with backpackers for bus fare. On the island of Hvar, we rented a room from a man with no shoes and a blind, three-legged dog. And outside Dubrovnik‘s white stone walls, we drank “cold drinks with the most beautiful view.” Then, when we should’ve taken the bus back to Split, we went to Sarajevo instead.

Back then, our traveling was spontaneous — and often uncomfortable — but it was always an adventure. A large part of the adventure was the fact that we were almost always broke, or at least entertaining the real possibility of running out of money. When we checked out of our hotel in Sarajevo, we paid our bill entirely with coins that we found in our bags. Pushing piles of 20-cent coins across the counter, I wasn’t ashamed the way I likely would be if I had to pull the same stunt now. Instead, I was proud of our resourcefulness.

When we returned to Croatia for a long weekend trip a few weeks ago, we were no longer the same empty-pocketed students. Rather than taking three trains, two boats and a handful of buses to get to Croatia from Italy, we arrived via plane less than an hour after taking off from Pisa. Our hotels were pre-booked and we could afford to rent a car or even hail a taxi.

But just because we could doesn’t mean we did.

Old habits die hard, and my husband had planned this trip. I was just along for the ride. And that ride was going to be on a bus.

The Zadar bus station was as decrepit as the new Zadar airport was clean. We had two hours before our bus would depart, so we sat on a bench and waited. After an hour or so, a bus pulled in with a sign in the window that read “Stalingrad.” Just that possibility excited me, the idea of a bus to Russia. Eventually the Stalingrad bus left, and later — much later — our bus finally arrived.

Our bus was headed north to Zagreb, but we weren’t going quite that far. After two and a half hours, in the middle of the Croatian wilderness, we got off in Plitvice.

Plitvice is home to a network of waterfalls and lakes that are filled with water that has a magical turquoise hue. The area has long been a national park, and was once one of Yugoslavia’s most popular tourist attractions. In March of 1991, it was also the site of the first fatality in the Croatian war for independence. Serbs controlled the park during the war, using local hotels as army barracks.

These days, the hotels are again serving paying guests, but from the looks of them, little has changed since Tito’s time. Concrete and worn carpeting were the pervasive design aesthetics, and though clean, our room offered little in the way of amenities.

We had arrived too late to hike to the lakes, so after checking into our hotel, the Hotel Plitvice, we headed next door to the Hotel Jezero for dinner.

The park has three on-site hotels, which sit in a row on a ridge overlooking the lakes. I had read that the Jezero was the nicest of the three hotels and was recommended for dinner. The alternatives were few: our own hotel restaurant — which did not inspire confidence at first glance — or a small take-away stand near the parking lot.

Admittedly, the Jezero was markedly nicer than our own hotel. And even though the food was likely better at the Jezero, it would be hard to be much worse. A cluster of waiters stood near the doorway as we entered the restaurant, which was housed in a cavernous banquet room in the basement. The sea of blue-gray carpeting was broken up by uniform rows of tables that were, in turn, separated by wooden dividers sprouting extravagant displays of plastic flowers. The youngest patrons by at least 30 years, we drew stares from other guests, as we had not fathomed that the venue warranted “dressing” for dinner. It was all very “Dirty Dancing” — the uptight 1960s Kellerman country club part, not the dirty dancing part — and of course, they put us in the corner.

Our waiter arrived pushing an undersized metal cart upon which sat a small basket of bread and a plate with a slab of butter. We ordered drinks and he nodded before pushing the squeaky cart away. A few minutes later, he was back, again with the cart, this time with two glasses on it. All the servers, in dutiful uniformity, were bent over their dainty carts, pushing them back and forth from the kitchen to the bar to their tables. Trays would’ve been so much easier to handle, but efficiency didn’t seem to be the goal.

A few weeks earlier, I had a regrettable fling with food poisoning in Greece and was still cautious about what I ingested. Fish and salad were out, leaving me with a variety of roasted meats or pasta to choose from. Spaghetti Bolognese is as safe as it gets in my book, but I should’ve known better than to order pasta in Croatia. Overcooked noodles arrived in a sad, soupy broth with a pile of chopped meat and tomatoes on top. My husband’s omelet looked equally appealing, though he was smart enough to order a side of French fries, just in case. He let me share the fries.

The next morning, after a rainstorm passed through, we headed out to explore the lakes. Taking a tram bus to the upper lakes, we planned to spend the day hiking down to the lower lakes, a walk that took a little over four hours.

Through the trees, there were glimpses of the magical, cerulean water. The footpaths deep in the densely wooded forest led to wooden bridges suspended mere centimeters above the water. Without railings to hinder the surreal feeling of walking on water, the narrow bridges traversed mossy embankments, rushing waterfalls and clear pools teeming with tiny fish. It was undoubtedly impressive, the Caribbean-like water transplanted into Croatian lakes.

These mystical lakes are, of course, no secret. And Plitvice seemed to attract a surprisingly large number of package-tour tourists. Retirees of every nationality slumped along the trails at a tortoise pace, Russian women posed for endless photos, and athletic groups of Germans pushed past — Entschuldigung! — wielding walking sticks. With each encounter, the lakes lost a little of their magical charm.

In just a few hours, the spell had been broken, so we hiked out of the fairytale surroundings and crashed in our Communist-era room. None of the three television channels really came in, so after a couple of Karlovacko beers at the bar, we headed to the parking lot kiosk to shop for dinner. That night, it was chips, candy and strudel — a marked improvement over the Hotel Jezero’s previous offerings. As we laid out our picnic on the hard bed in our shoebox of a room, the rain began to fall again outside.

Soon we’d be catching the bus out of Plitvice, pulling back into the bus station in Zadar, checking into a luxurious hotel with plush bedding and a loaded mini-bar. Our last night in Croatia would be spent in Zadar and it would no doubt be comfortable — my husband’s concession after two nights of post-communist chic — but it wouldn’t be an adventure, like our first trip to Croatia had been. As comfortable as comfortable is, that’s usually all it is too. But I’m sure that there exists an ideal balance between comfort and adventure. Like Goldilocks tasting porridge and testing beds, maybe our third trip to Croatia will be just right. Maybe I’ll get it right, next time.

Ryanair flies to Zadar from Pisa, and Easyjet flies to Split from Milan Malpensa. Croatia Airlines flies direct from Rome to Split.

Buses run regularly from Entrance 2 of Plitvice Lakes National Park to Zagreb, Zadar and further down the coast to Split. Plitvice is located about halfway along the main road between Zadar and Zagreb and the trip takes about two-and-a-half hours to either city. Ticket prices vary, but generally cost about 80 kuna.

Admission to the park costs 80 kuna (about €11 at 7.2 kuna to the euro) Nov. 1-March 31 and 110 kuna April 1-Oct. 31. Tickets are valid for the duration of your stay, provided you are staying at one of the hotels inside the park. Validate your ticket for extra days at the hotels’ reception desks. See park and hotel information for details.