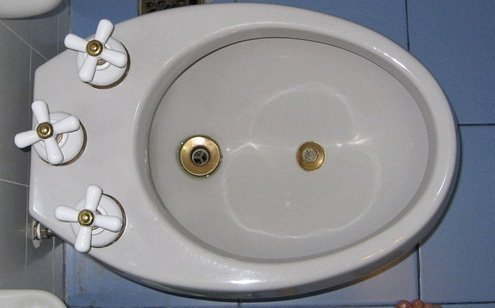 his holiday season I want to bring a message of significance to the world — especially today’s world. With the economy dooming and war staying put, this festive time makes me to reflect on the important things in life. As a mother of a bicultural child — an international playboy, some may say — I find myself grappling with questions such as: “What do the holidays mean to us as a family?” or “Is it better to give than to receive?” and “Which traditions do I want to instill?”

The later only raises more questions:

Should we bake cookies or just buy a Panna Tonna?

Should I introduce Baba Natale or Santa Claus?

And by far the most pressing:

To bidet or not to bidet?

Now that is the question.

Sure it has nothing to do with the holidays and it’s not a question that spreads good will and cheer, but it’s one that lingers and burns. It haunts me actually.

Like an airplane phobic that doesn’t fly, don’t even use the thing. I dislike looking at it. I have no idea why. It’s not as if I suffered bidet trauma. It’s just so foreign to me. So… French (no offense to the baguette, brie and Givenchy).

My aversion to the porcelain prince didn’t bother me until my mother-in-law casually told me about her daughter’s childhood injury: “She climbed on to the washing machine… she had been in the bathroom and she had used the bidet — because, of course, I taught her well — and then she jumped, fell and hit her head. Blood was everywhere.”

The head injury didn’t worry me. The bidet reference did. Was I responsible for teaching my kids about the bidet?

I thought I would have my hands full with potty training… bidet boot camp seemed like more than I could handle. How would I do it? What would I tell them? I didn’t know the first thing. For starters, did you straddle it, ride sidesaddle, or — in the delightful words of rapper Juvenile — “Back that ass up?”

Does one plant oneself in the bowl or simply hover? Did men use it differently than women? And at what age does one start bideting?

I panicked, ashamed at my ignorance. I had to conquer the beast.

Weeks later, standing in front of my vanity applying make up (it was full kabuki), I saw it in the mirror. There it was, staring at me, mocking me. The bidet was terrorizing me. I finished primping and went on my way.

Next day, the bidet started again. This time, abusive amounts of coffee gave me the liquid courage to flick on the faucet and fill the bowl with soapy, hot water. I added lavender oil to calm my nerves and popped my feet in for a pedicure.

I had taken the first plunge! As an at-home spa treatment it wasn’t half bad. I felt better about my mental barrier. But to bring the situation under control I knew I’d have to use the darned thing … appropriately.

Progress came soon after the pedicure. We had a visit from a nine-year-old girl, a neighbor who likes to practice her English and play with my son. She’s bright and sweet and polite.

Could she go home to use the bathroom? she asked.

“Use mine,” I replied, finding the request odd. She’d used our facilities before.

She looked at me with regret and said, “I can’t. You don’t have bidet towels.”

I was mortified. And confused.

It was time for answers. When my husband Marco came home, pent-up questions flew. The denouement was Seinfeldesque. “What’s the deal with the towels?” I demanded to know.

“Wow! Down frik out!” said Marco in his best “don’t-freak-out” American slang.

But I was freaked out. What were the rules, I demanded? What was the appropriate thread count for a human genitalia towel? These were vital questions. “If I don’t know, how on earth am I going to teach our kids about it,” I barked.

I then turned militant. “I’ll hang stockings, shop ’til I drop and sing carols,” I announced. “But I won’t use the bidet.”

That was that. I would bake cookies and write to Santa Claus, while Marco would handle our son’s bidet duties. Yes, he could do it.

Here’s hoping your holidays are happy, and hygienic.