Popular Hits of the Showa Era 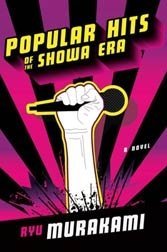 Here are Dumb & Dumber vs. Tokyo divorcees with a ramped-up side of nihilism and mass destruction. In Ryu Murakami’s often enervating 1994 gender-war novel we meet six karaoke-loving Tokyo twenty-something men (men in a manner of speaking) condemned by idiocy, immaturity and indolence to spend their days eating, singing, playing peeping Tom or plotting Beavis-style mayhem, earnestly working attain “new levels of dementia.” Literal reactionaries, they lack “the imaginative power necessary to intuit what others want or need.”

When one of the Group of Six charmers randomly murders a member of the Midori Society, a weirdly miniature association of thirty-something women who share the same surname (and also sing karaoke), the semi-spinster gals plot appropriate revenge. The escalating battle between the estranged yields all manner of pulp fiction slathered in pop songs (hence the title), awful puns, grunt-mongering, projectile vomiting, rocket launchers, and copious amounts of mutilation. In short, your average Made in Japan, homage-to-the-U.S.A bloodcurdling satire with an apocalyptic coda.

Musician, talk show host and author Ryu, not to be confused with Haruki, writes clever and engaging prose and has over the years produced his share of Tokyo crime and camp (“Piercing,” “In the Miso Soup” and “Audition”). Here, however, burping outrageousness gets the better of the gag, or is the gag, leaving recycling, overcooked farce.

In fairness, Murakami churned this out — and churn he does, more than 40 novels — just as Mike Judge’s “Beavis and Butthead” was making noise in North America, but just before Quentin Tarrantino coughed up “Pulp Fiction” and the Coen Brothers produced their lost-in-human-space joyride “The Big Lebowski.”