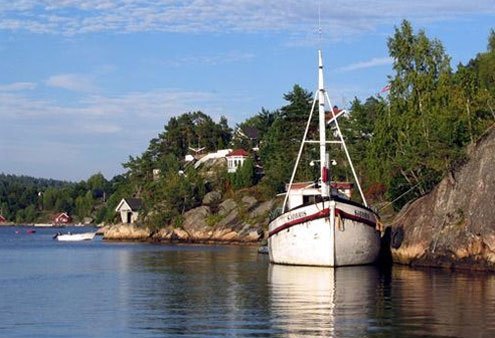 Sweetie, that is the best idea ever!
W

hat do you want to be for Halloween?” I asked my four-year-old in September. Without looking up he said, “Pop’s boat.”

My son has a neurological processing difference, which affects both understanding and production of speech. Clearly, I thought, he did not understand the question. So I posed it differently. “No, sweetie. I mean for Halloween. Like last year, you were Lightening McQueen. What do you want to be this year? You could be a pirate or a ghost or a….”

He got it. I was the one with the comprehension problem. He wanted to be my father’s boat. More specifically, he began to elaborate that he wanted to be my father driving the boat. He explained that he wanted to construct the boat with the same black stripe and Volvo engine. And he wanted big waves around the boat’s propeller like it was going fast. As he continued to explain the crafty vision for his grandfather’s watercraft, I was suddenly dealing with waterworks of my own.

Without warning, tears dripped down my cheeks and a surprising sob came up though my throat. I tried to muffle the noise as best I could. In fact it ended up sounding more like a yelp as I scampered away so that my sons wouldn’t notice my emotional outburst. As I escaped the living room I did manage to say, “Sweetie, that is the best idea ever!”

And it was. Especially because it came from him. I sat in my bedroom and let the sobs come in waves. The tears were spilling over with a plethora of emotions. My son had a spontaneous creative thought and put it into words for the first time. For my blabbermouth two-year-old, this is commonplace. For my first-born four-year-old, this was earth shattering, press release worthy kind of stuff.

Six months ago after two world-renowned specialists told us, “Your son has encephalopathy. Which is a fancy term for brain damage or malfunction…” I had an out of body experience. I was prepared for a lot. But not that. Once I returned to planet earth, I said, “But of course, he will go to college and get a good job.” Without pause they replied, “The best thing you can do is make sure he is happy and has good self-esteem.”

I can’t tell you what I thought next because it all became a blur. But I can tell you that even though happiness is the goal of everyone who parents, a mother’s aspirations for her child never ends there. We all dream of beautiful possibilities for our children.

When I was five, I remember my mother asking me, “What do you want to be for Halloween?”

My reply: “I want to be a Kodak Instamatic camera.”

My mother was used to my unorthodox choices. My sister thought it would be difficult to construct and asked, “What about the flashbulb?”

“I’ll cover a box in tin foil and stick it on my head.”

“How will you make the lens?”

“Relax,” my mother intervened. “Kissy can be whatever she wants to be.”

And I grew up thinking that. I could be whatever I wanted to be — on Halloween and in life. Mostly I wanted to be an actress. But for a brief period the in third-grade when we studied the U.S. presidents, I did consider running for that office. My parents saw no reason why not and I believed them. A year later, I discovered “Tales of a Fourth Grade Nothing,” and announced, “I want to write like Judy Blume when I grow up.”

When the specialists dropped this bomb on us, they gave us no prognosis and added that so much of neurology is a mystery. They also added that if he made a “big leap” in development this year, he might even make a full recovery.

When they gave us this nebulous diagnosis it brought guilt and pain — and it partially destroyed the dreams I had envisioned for my son. And so I began to selfishly mourn the loss of who I thought my child could one day become. Until I sat on my bed crying over his inventive idea for a Halloween get up.

At that moment it hit me. His mysterious neurological make-up was leaping! He was catching up! For the first time in a long time I again believed in his possibility. So, I wiped my tears, went back out in to the living room, kissed his entire face and started to sketch out our maritime masterpiece.

I am happy to report that our Halloween was a smashing success. After we put away all of our orange and black decorations Leonardo said, “Halloween is finished!” And I said, “Yea, it is. But it will come back next year.” And then I said to him what my mother always said to me, “And you can be whatever you what!” And I believed it.

Then he said, “Now Christmas is coming. What is Santa going to buy me?”

Yea. He can be whatever he wants to be.