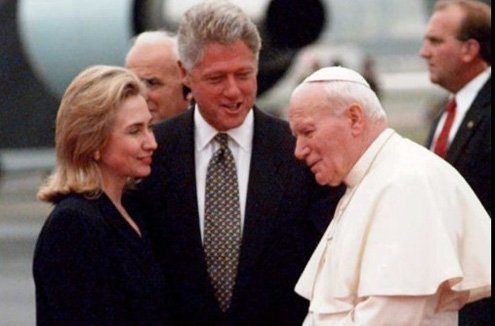 decade ago, a requiem mass for the enormously popular Pope John Paul II drew more dignitaries than any funeral in history. Among the four kings, five queens and 70 heads of state gathered to honor the pope at St. Peter’s Basilica on April 8, 2005 were three U.S. presidents: George W. Bush, the first sitting president to attend a papal funeral, and two of his predecessors, Presidents George H.W. Bush and Bill Clinton.

Twelve presidents have met with six popes over the last century. The first such encounter was President Woodrow Wilson’s pilgrimage to the Vatican in 1919 to discuss post-World War I peace with Pope Benedict XV. In his 27-year pontificate, John Paul II met more than once with each U.S. president who spanned his tenure.

On Oct. 6, 1979, Jimmy Carter became the first president to welcome a pope to the White House during John Paul’s whirlwind, six-city tour of the United States. (Time magazine dubbed the pope “John Paul, Superstar” owing to the immense crowds he drew). “He seemed to welcome a free exchange of views, and I disagreed with him on his perpetuation of the subservience of women and their exclusion from the priesthood,” wrote Carter in his 2006 book, “Our Endangered Values.” Carter, who visited the pope at the Vatican the following year, summed up their dialogue as “a harmonious exchange.”

Carter’s absence from John Paul’s funeral was widely noted. George W. Bush informed him there was no room left in the Rome-bound delegation, which also included First Lady Laura Bush and Secretary of State Condoleezza Rice. Many suggested Bush had snubbed Carter for his outspoken criticism of the Iraq war.

In January 1984, Carter’s successor, President Ronald Reagan, established formal diplomatic relations with the Vatican, something the U.S. had long avoided, fearing it might give rise to anti-Catholic sentiment and blur the traditional American church-state divide. Reagan and John Paul, both former actors and unwavering anti-Communists, met four times during Reagan’s presidency and maintained an intriguing correspondence over dozens of letters.

Their most famous encounter occurred in the spring1984 while their planes were being refueled at the airport in Fairbanks, Alaska; Reagan was heading home from China while the pontiff was en route to Seoul. The meeting spawned a new fashion statement: T-shirts reading “The Pope Meets the Dope,” an allusion to what many perceived as Reagan’s notorious inability to focus on matters at hand, as evidenced during his first visit to the Vatican in 1982. While John Paul delivered a sobering address about the crisis in Lebanon and the Falklands War, cameras caught Reagan enjoying a good snooze.

John Paul clashed with both Bushes over their penchant for declaring war. In 1989 and 1991, the pope welcomed the first Bush for a private audience at the Vatican. During the 1991 meeting, John Paul expressed his vehement opposition to the U.S. led Gulf War. Bush, the former vice president under Reagan who had worked alongside the Vatican to end the Cold War, carefully described the exchange as a “major tour d’horizon, touching on all the trouble spots” around the globe.

The Vatican denounced the second invasion of Iraq spearheaded by the younger Bush as “a crime against peace.” Before the war began in 2003, John Paul sent the Apostolic Pro-Nuncio Pío Cardinal Laghi to Washington with a handwritten letter imploring Bush to reconsider the looming invasion. According to reports, Bush received the letter but failed to open it. After returning to Rome, Laghi reported that the Americans had been friendly, but that “friendship is not enough.” (John Paul was nominated for a Nobel Peace Prize in 2003 for his opposition to the Iraq War; it was ultimately awarded to Shirin Ebadi, an Iranian judge and human rights advocate).

Despite their division over Iraq, Bush and the pontiff saw eye-to-eye on right-to-life issues; Bush publicly credited John Paul with his decision to ban government funding of stem cell research. In 2004, Bush traveled to the Vatican for the last time to present the ailing pontiff with the Presidential Medal of Freedom, America’s highest civilian honor.

In 1993, Clinton met John Paul for the first time in Denver on World Youth Day, an event originally launched by the pope in 1985. Clinton warmly received the pontiff on the tarmac of the Stapleton International Airport before retiring for a private summit at Regis University, which Clinton summarized as “cordial and productive.” Clinton, a Baptist, admired Catholicism and the pope; he reminded John Paul that he had graduated from Georgetown, a Catholic college where his instructors were often nuns and priests. In 1995, Clinton and First Lady Hillary Clinton adorned the front row of a packed vespers service led by the Pope at Sacred Heart Cathedral in New Jersey.

The pro-choice Clinton Administration clashed openly with the pope during the 1990s over abortion rights. With Clinton by his side during a joint World Youth Day address, the pope reiterated the Vatican’s anti-abortion stance: “All the great causes that are yours today will have meaning only to the extent that you guarantee the right to life and protect the human person.”

Clinton and John Paul both worked hard to end the human suffering caused by the siege of Sarajevo, which took center stage during their meetings in 1993, 1994 and 1995. “He reminds us to think of the people — not just the governments of other countries, but the people of other countries,” Clinton once said of John Paul. “And that’s an important thing for an American president to keep in mind.”