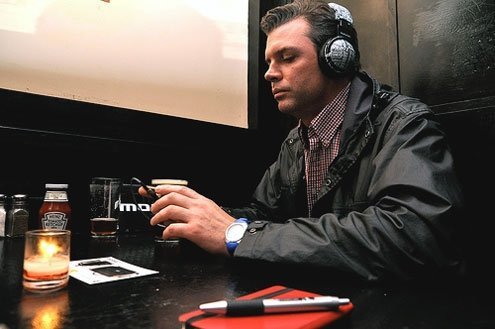 first heard Battles at a dingy club in Columbia, South Carolina with maybe a dozen people present. Euphone opened. Had it not been for a last-minute call from a friend, I wouldn’t have known it was happening, much less gone. I think the cover was $8.

That I still vividly remember Tyondai Braxton jogging in place and John Stanier stretching absurdly to reach the hi-hats and how the music never ended where it started is a testament to their enduring appeal as math-rock band that finds the most circuitous routes through melodies and rhythms to get where it wants to be.

I toasted these qualities in a love letter to their debut full-length Mirrored in early 2007. But it might as well have been a eulogy. After startling success, Braxton quit the band in 2010 following an appearance on the “Twilight” soundtrack, a song called “The Line” closing the book on a strangely wonderful and fruitful period for the group.

Reduced to a trio, Gloss Drop (Warp) opens another. As a solo artist, Braxton has so far had his share of chin-scratching academic moments, a quality that Battles benefited from. It was rarely easy (see the 2006 EP B EP), but the point was testing out the possibilities for what pop music could be. The journey was part of the destination.

Without Braxton, all that exercise has paid off. Gloss Drop is Battles’ leanest and most straightforward collection. Straightforward is a relative term, of course. “Ice Cream,” the first single, has Chilean electro-pop savant Mathias Aguayo singing about the dessert in Spanish with a load of reverb, echo, and reversed effects. It’s counterintuitively catchy, fun but not disposable, different without being too deep. It shares many qualities with Mirrored’s lead single “Atlas.”

Its natural ebullience is partly Aguayo’s fault, but “Ice Cream” isn’t an island on this album; one look at the cover of a bright pink pile of melting Silly String could’ve told you that. Songs featuring Gary Numan and Yamantaka Eye of Boredoms do one better by demonstrating this more obvious luminescence, a sort of lighthearted humor-infused worldview now on full display.

“Africastle” doesn’t suggest it initially, opening the album in a classic Battles-style build-and-switch, running from one plucked note and a pulse to an off-kilter keyboard line and coagulating into some Stanier-guided math-rock missile. Five minutes later, a completely different keyboard line ends the song.

Putting this track first seems to suggest they can still tap both the moves and the menace. But it’s a bishop’s gambit: Gloss Drop actually goes in a different direction, with jams like “Ice Cream” or “Sweetie & Shag,” featuring Blonde Redhead singer Kazu Makino’s lilting vocals. The songs still twist and turn unexpectedly, but they sound more approachable than ever.

I recently saw Battles for the third time touring on material entirely from Gloss Drop (because, Ian Williams explained, it just wasn’t possible for the three of them to cover Braxton’s parts in the old music). Two things struck me: How loose it felt and the amount of improvisation in the segues between songs. Maybe the band was still learning and adjusting to new material. Having heard this album in full, it’s likelier to me that they’ve opted to drop their most rigid, coldly futurist qualities in favor of getting on with the business of making pop music in disguise, their greatest forte.

Listening to Gloss Drop is to hear music on the cutting the edge of convention.

— Battles plays the Neapolis Festival in Naples on July 10th.