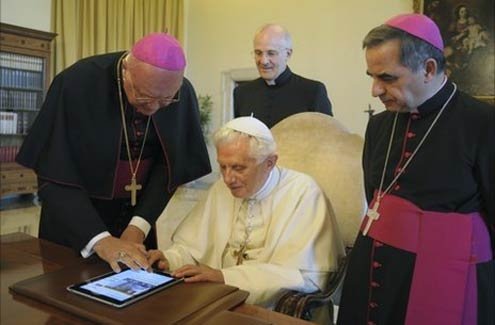 A tweet of the Holy Fathercan be ... a spark of light, a pearl of wisdom, a drop of fresh water to rediscover the real meaning of Jesus.|
T

hese are peculiar days for the Vatican. Long at home in the global spotlight, it now operates on the fringes of relevance. Taught to see its revered leader as a pivotal international figure, the Roman Catholic Church has instead been forced to progressively adjust to the daily reality of a non-dynamic, incumbent pope in his mid-80s who struggles for voice and space in an increasingly cluttered cultural landscape.

New millennia gear-grinding can make for near-comic scenes, with the German pontiff made to pose ornately front of a digital tablet, looking like a sweet white wizard, all to demonstrate a newfound but hardly credible dedication to social networking.

Since the dramatic and painstaking death of Pope John Paul II seven years ago, the Rome Church has largely been tasked with scandal-abatement, pedophilia in the forefront. Lacking a celebrity lead singer, a role reveled in by Polish philosopher pope Karol Wojtyla but inimical to successor Josef Razinger, the Vatican has had no star to advertise, and fewer gigs, since Ratzinger, 77 when elected, was never suited globe-hopping.

Beneath this papal shortfall, however, the Church continues commanding vast social and political power both in Italy and in the developing states of south Asia, which still share much in common with the poor, peasant-laden territories run by papal proxy until the mid-19th century.

The Vatican’s home-front problem instead amounts to something like disorientation. Muted is the sway the robed rituals that captivated a generation-and-a-half of TV broadcasters. The daily costume ball staged by the Church at tradition’s behest has diminished resiliency in an age tuned to irony and inclined to mock crayon ritual, or find it quaint.

While believers still believe (if not in the Vatican, in the faith), uncommitted fence sitters have lost some of their awe, if not their religion.

All this is new to the Vatican, which some insiders still imagine as a separate but visionary realm where faith’s ostentatious leeway always comes ahead of temporal concerns. The infallible pope didn’t (and doesn’t) do press conferences. He remains the inheritor of an immodest office that once indirectly lorded over Europe and force-fed politics for 19 centuries.

But the choice-driven, scandal-dependent urban world has recalibrated the pecking order, putting the German pope in the awkward position of needing to cater to an increasingly distracted “constituency” while trying to woo those still potentially shopping for something, or someone, to believe in. His is now a salesman’s role.

But Ratzinger is not a salesman, let alone a likely Twitter candidate. Instead, he’s the prisoner of an arcane world whose only escape hatch is the spontaneous transcendence of its liturgical limitations, a non-teachable trait that Ratzinger’s mentor and predecessor, John Paul, a born pastor, possessed well ahead of his time. That transmission over, the papal side of the Church is being schooled in PR 101: modesty doesn’t sell.

It’s not all Ratzinger’s fault. His 2005 election seemed to satisfy two immediate Vatican needs: the first was continuity, since the German cardinal was Wojtyla’s doctrinal lieutenant and a consummate insider; the second was a short-term run, since a man of 77 wasn’t seen as lasting as long as a man elected at age 58.

But connivance, a key to Vatican DNA, can also backfire. The logical successor to long-reigning Pius XII after his 1958 death was Giovanni Montini, the incumbent Archbishop of Milan. But Montini, not yet a cardinal, was considered too young (he was 60). Instead, Angelo Roncalli, 77 like Ratzinger, was elected pope, becoming John XXIII. Seen as a caretaker, he upset the Vatican apple cart by triggering the groundbreaking Second Vatican Council, Vatican II, and issuing a fundamental encyclical “Pacem in Terris,” a masterpiece of ecumenical dignity. In four short but busy years between 1958 and 1963 death (Montini, Paul VI, followed him), John evolved into one of the most revered figures in modern Catholic history.

The Church got one wish, an abbreviated papacy, but on the other saw its caretaker pope usher in an epic (still ongoing) debate between progressives and conservatives.

Ratzinger, as Pope Benedict XVI, has been far less controversial. He’s ruled decently if non-controversially, doing little to stand out in a world messier and more interconnected than ever before.

He’s also shown no signs of short-term susceptibility. He’s a spry and elegant 85, a walking advertisement for elderly stylishness. But elderliness, once in vogue, is no longer. Much of the planet, including the Catholic planet, is in the hands of people two generations younger than the pope, in age and sensibility.

Then came allegations of systemic pedophilia, which caused the Church to stutter repeatedly (same with sweeping changes in gay rights). These are lurches well out of Ratzinger’s comfort zone, and to some extent the Church’s. In broader terms, the world’s urban frenzy has come to outstrip the rural Vatican’s ability to respond with any sense of discernable order. So it tries merely to keep up, insisting that a reluctant man show himself ready to network with his accelerated “friends.”

Badly in need of another communicative pastor — in his early years, John Paul II mastered and won over media — the Church instead chose an adroitly religious technician and bureaucrat, hoping he’d stay the course and vanish at the right time. In staying the course, he’s done admirably; but he hasn’t gone away. Instead, he’s about to enter the ninth year of a dull papacy that has a large but static following (pending new Twitter friends).

So it was that the papal wizard’s aides pushed him toward Twitter, eager that he peck away in full view of media cameras. “A tweet of the Holy Father,” said a promoter of the campaign, “can be … a spark of light, a pearl of wisdom, a drop of fresh water to rediscover the real meaning of Jesus.” If only such would-be earnestness didn’t feel like the act of a humbled and disoriented institution in search of a substantive impact it longer possesses.