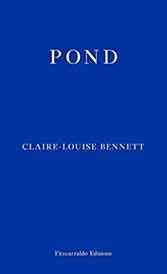 A crank. Not a hag. Not at all, but a crank for sure, an obsessively observant woman who has walked away from urban life (she previously lived in London, in Berlin) to nestle in a thatched-roof cottage somewhere in the far western parts of Atlantic-snarled Ireland. It’s a properly ragged place hospitable to a drifter’s keen pride. She’s made the move not so much to get away from it all (and the many-shaped fears of the all) but to find a convincing base-camp from which to comb through the molecular acres of her particular self-involvement, nutty advice included (“…Be very careful with flaked almonds; they are not at all suitable for morose or fainthearted types and shouldn’t be flung about like confetti because almonds are not in the least like confetti.”)

Give such an eclectic, eccentric, bike-riding prober world enough and time, and solitude — she has all three— and the result is a cynical sprawl of rural ruminations spilled while absorbing the squirming minutia of local life: miscellaneous bugs, ungainly vegetables, rat catchers, “veteran” rain storms, packed outhouses, oddball male visitors, and vaguely insufferable neighbors (responsible in part for the sign in front of her local pond that reads “pond” — “If it were left up to me … I’d write something else, such as Pig Swill, or I wouldn’t bother at all.”)

Here is a woman — 40? 50? In between? Does it matter? — so attentive to her mind’s hive that whatever she has to say about quirky vegetables and nattering humans had damn well better be nimble enough to withstand the test of 150 self-involved pages. They are. So is Irish writer Claire Louise Bennett’s chocolate prose in which nothing is left inanimate (on loose stones: “… these strange teeth, these melancholy prisoners, these motley iconoclasts, these encompassed crones, there in the bedrock of all that is hefty and firm.”)

Bennett’s narrator is so attentive to the motivations and foibles of people, things and creatures (interlopers both real and imagined) that her vision of self and place acquires an improbably dramatic dimension. “Pond” is not Walden Pond. These linked vignettes instead offer idiosyncratic aloneness as a script for the life less lived: fragile, existential, and cloaked in the intimate mysteries solitude exists to protect. At one point, the narrator notes that English is not her first language. Nor is it in fact the first language of her meditation. “… I don’t think my first language can be written down at all. I’m not sure it can be made external you see. I think it has to stay where it is; simmering in the elastic gloom betwixt my flickering organs.” Better that way.