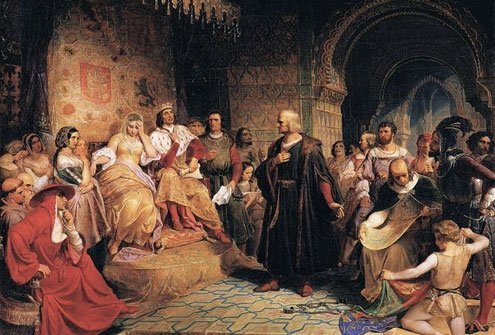 Columbus: Discoverer of the different.
S

ome time ago I dined with a group of Italian friends one of whom ordered an amatriciana Bianca. I was confused. The amatriciana I know is a spicy tomato sauce with small pieces of pancetta (cured bacon) or guanciale (like jowl bacon) and some sharp pecorino cheese. Making that dish Bianca, or white, with bacon and cheese as condiments, threw me.

My friend explained that the original amatriciana, la vera amatriciana (“the true amatriciana“) as he called it, predated the presences of tomatoes in Italy. Though it’s hard to imagine Italian cuisine without the tomato, they didn’t enter the cuisine until the start of the 16th century, with the discovery of the New World and its bounty.

Some say the ceiling of Santa Maria Maggiore is gilded with Incan gold, though there’s scant evidence the theory. On the other hand, we do know that Ferdinand and Isabella of Spain paid for Bramante’s “Tempietto,” which sits atop the Gianicolo Hill in a complex still owned by Spain.

Aside from gold, early explorers brought back a range of foods and exotic animals. Wild turkeys, a distinctly American animal, made their European debut. So did potatoes.

Many of these foods became European, and Italian, staples. What would Calabrian cuisine be like without the heat of a chili pepper; Neapolitan pizza without tomato sauce; a Rome Thursday without potato gnocchi; or cold night in the Piedmont without polenta? Unthinkable.

Genovese explorer Christopher Columbus opened the door when he set sail in search of another route to the Spice Islands of the Indies. European demand for black pepper was high, and helped generate his journey. What he found was something else entirely.

Pepper plants were nowhere to be found in the New World. Chili peppers were another matter. Tasting the fiery new plant, early explorers considered it a variation on the pepper they knew, and applied the same name. The chili pepper rapidly became an important global commodity.

The potato, among the oldest New World foods, was domesticated in Peru sometime in the third millennium BC. Thousands of varieties of the nutrient rich root thrived by the time Spanish explorers moved into Latin and South America. The Spanish empire, dominant throughout Europe in the 16th century, would soon use the potato to feed its armies, leaving behind potato crops that local populations began cultivating. By 1600 it was already a cheap staple of the northern Italian diet and a bastion in Ireland, a dependency that eventually ended badly.

The tomato may have appeared in Europe as early as 1493 but it was first documented in 1544, when an Italian botanist and physician labeled it pomo d’oro, or “golden apple.” The name stuck.

Native to Mexico, the tomato took very well to the Mediterranean growing climate and was widely cultivated in southern Italy by 1600. Northern Italians took a little longer to get used to the new plant, and used it primarily as a table ornament until perhaps as late as 1700.

Americans were even slower in welcoming it to their tables. Until the large movements of French and Italian immigrants in the 19th century, Americans believed the tomato was poisonous.

Now, tomatoes are not only fundamental but also available all year round. In the winter they come from Sicily, which produces the little round pachini from Pachino, the southern-most tip of the island (which actually sits at a lower latitude than some points of Tunisia.) During the summer they’re so abundant in central and northern Italy that some grocers practically give them away. I recently bought four kilos for €2 at Rome’s Mercato Trionfale.