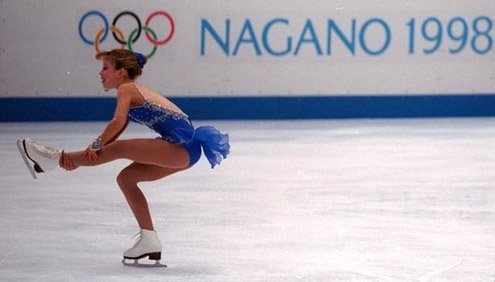 hen pondering the difficult and often uncomfortable question of what to do when I grow up, I find myself longing for my childhood. My nostalgia doesn’t stem from the reasons one would imagine (blissful ignorance or a carefree existence) but rather for the sheer creativity I possessed in imaging my future, adult self.

Among my earliest memories is of donning a pair of my father’s oversize gym socks, folded four times at the ankle, and sliding around my kitchen floor. It was the Winter Olympics, the year of Tara Lipinski and Kristy Yamaguchi, and I gracefully launched my small frame in the air, realizing, breathlessly, that figure skating was my destiny. I double and triple lutzed while watching my future competitors glide their way effortlessly to victory. My dreams of an Olympic medal thawed and eventually melted away along with that winter’s snow, replaced by summer’s trips to the pool and the mystery of learning to read that fall.

Ballet came next, a career path much more tangible than the previous one. I enrolled in classes at age eight and advanced quickly under the reassuring smile of Miss Lynn. In class I wasn’t called Alexandra but something like “GoodAlexandraGood!” I imagined myself performing in “Giselle,” or as the Sugar Plum Fairy, being lifted gracefully into the air by a Leonardo DiCaprio look alike if not Leonardo himself. I glissaded down the second grade hallway, I brought my glossy pink Pointe shoes to show-and-tell, I fell asleep rehearsing in my head. But thoughts of a ballet career quickly ended when I was placed in a higher-level class. Not recognizing the complicated adagio sequence, I locked myself in the studio’s bathroom, mortified, before one of the older dancers coaxed me out.

By fifth grade my ballet ambitions had been replaced with an interest not just in wildlife, but birds. Much to my parents’ confusion, I requested a monthly subscription to the now defunct Bird Talk magazine, blissfully pouring over each issue. By January I was able to identify most tropical birds and by March I could identify the species and genus of most birds in my backyard. I knew what to do if your parrot was molting. Declaring my future career in ornithology, I carefully tore out photos of researchers studying in the rain forest and taped them to my binder. I begged my mother for a cockatoo for Christmas, who I planned on naming Polynesia. I promised I’d keep her safely in her cage, away from our cocker spaniel and his hunting instincts.

In middle school, I burned to be an actress. I’d spend hours in front of my bedroom mirror, willing myself to cry on cue. I cast myself in various films, all with Brad Pitt as the love interest, ignoring the rather unsettling age difference between us. My Oscar speech was carefully written and edited in my head on long bus rides to school, and I made myself promise to apply to universities only in California or New York, where I could secretly audition for TV pilots between my classes. The popular girls that frightened me within the hierarchy of my seventh-grade class might even call me once I’d finally got my big break. “Isabel who???” I’d say.

By my teen years, I seriously considered becoming a writer. My essays mimicking Murakami and Faulkner garnered praise and receiving graded papers in English class was a downright delight. I attempted to maintain a humble, noble face when my short stories were chosen for reading aloud to the class. “It’s nothing,” I’d say. “I didn’t think anyone would even like it.”

But then life grew more complicated. I excelled at languages but barely passed Advanced Placement history. I worried about not having a boyfriend and then worried about having one. I got into college and underwent the task of explaining armchair anthropology and Spanish phonetics, all the while assuming that a career, a plan, would simply come to me as it had so many times, however silly, in the past.

Sometimes I miss the days when I was absurdly confident, so strongly convinced about the possibility of my actions. I crave the flexibility of the childhood me. It was easy to imagine different versions of a future without the burdens represented by finance, time, and the permanence a career. At almost 25, many of my peers are confidently power walking towards their future. One has three children and studies midwifery at Yale. Another one vaccinates children in Zambia. Some receive local acclaim. “I saw Caroline’s mom,” my mother recently announced after her bi-weekly trip to the supermarket. “She said Caroline has a big job up in New York.”

I recently uncovered an old video of me “figure skating.” I am, predictably, horrible, nothing at all like the gold medalist I had pictured in my head. I tried to catch a glimpse of my face: would it be confident? Determined? Smiling? But some things move too fast to be seen clearly, like a five-year-old in baggy socks, breathlessly barreling her way across the kitchen floor.