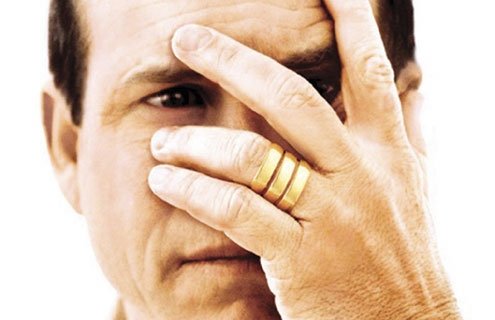 Bill Paxton had three wives to contend with in "Big Love."
A

nna had always prided herself on her open mind and fluid principles. Never one to judge, she believed karma worked in both directions and that her adventures — and occasional — misadventures would never come back to haunt her or her reputation.

If something or someone ever struck her as scandalous or just plain wrong, she noticed. Brian’s profile leapt off the page of one of several dating sites she followed, precisely because he was a self-declared polyamorist, which struck her instantly as completely ridiculous.

He was a successful musician and appeared to be quite well read and traveled. In his picture he had a Brad Pitt-esque quality.

She barraged him with questions in her first email. Did he have rules like the show “Big Love”? Did every woman have her turn? Did he schedule in equal time for everyone? Did he think he could love more than one person at a time? Did he also love boys?

She assured him that she was way too egocentric to get involved in something like that, but that she was sincerely curious. He did not have to write back, and that she was probably just in a polemical mood anyway.

He responded with a lengthy self-defense of his lifestyle and philosophy. He felt luckier and freer and more secure in his relationship than ever before.

He also wanted to take her out the following Monday night.

She accepted, flattered, curious, and admittedly argumentative. He had what he called a “primary partner,” but was open to passionate meaningful relationships on the side.

Yet, something clawed at her consciousness. Why did this stranger’s chosen lifestyle bother her so much? She hadn’t even met the guy, but felt determined to seduce him away from his safe primary partner and shatter his illusions.

She accepted his invitation in a strapless Bordeaux-colored mini dress and heels.

They met in the line for a story-telling event in SoHo, his idea. Her eyes darted about, careful not to settle too long on his. He, on the other hand, eyed her with a combination of hunger and admiration. Later, when he rose to order more drinks, he laid an unapologetic hand on her knee.

Their next stop, a charming West Village cocktail bar complete with jazz combo and candles.

When he left for the bathroom, he brushed her hair behind her ear and kissed her forehead.

She tried to ignore the shudder, but when he returned to the table and suggested they get out of there, she felt the blush spreading across her face, down her back and up the insides of her thighs.

They raced back toward his apartment. Not even the cold slap of the wind could cool her face or calm her senses. With every flight of stairs leading to his fifth floor apartment, she weighed the options.

No matter how enthralled he seemed, this could never go beyond the bedroom.

He closed and locked the door behind her and wrapped a warm palm around the back of her neck, guiding her first to the couch and then to the bed. She resisted just enough to force the force of his hands around her wrists. The conquered, conquering.

He insisted she stay over. He wanted her there in the morning. She shrugged and surrendered.

They awoke to tangled covers and sun stripes on the back wall.

It was there, just beyond an overstuffed bookshelf, that she noticed four portraits of a plain, blond, smiling woman. The one he was with but not with, whom he loved, but did not make love to this morning or the night before.

She perused his poetry books and selected one. She read two passages until he took the book from her hands and pulled her into him. The hair of his chest ground into her back and thick forearms held her in place. She pressed one cheek against the wall and shut her eyes.

He watched her as she dressed and pulled her close before she left.

Before she’d even hailed a taxi he called to tell her she’d left something behind, and that he would keep it until they met again… which he hoped would be soon.

We’ll see, she responded coolly. Her lips burned. Everything burned.

He called her later that evening and she let it ring.

In the shower she scrubbed him from her skin. She dragged the sponge across her hips, up the backs of her arms, and between her legs, releasing his scent into the steam.

She wiped off the mirror and smiled hard at her own reflection through the persistent condensation.

In bed she clutched a pillow to her side and waited for sleep.

She could smell him in her hair.