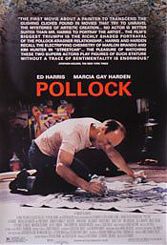 A labor of love by director and star Ed Harris. Harris’ Jackson Pollock is nervous twitch of a man who hones his own self-destruction. Pollock suffers highs and lows helplessly; his artistic genius comes in grumpy spasms. Critics are the death of him. Marcia Gay Harden, as companion Lee Krasner, radiates Pollock’s extremes through loving exasperation (she won an Oscar). This is the story of the rise and fall of a modern genius. It’s doubtful Harris could do any better. It’s also difficult to imagine a sadder movie. As Merton wrote of Joyce, Pollock is the saddest man on earth.