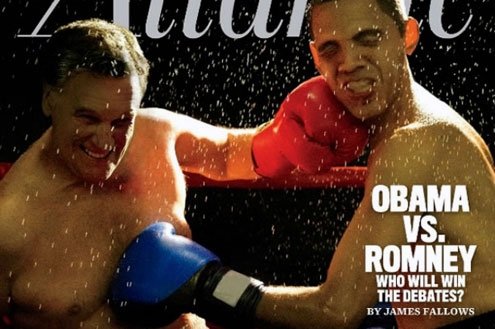 The Atlantic magazine notion of the debates may have been too kind.
A

radio tidbit, a newscaster quote, and a Rome anecdote all come to mind in the aftermath of the first U.S. presidential debate, in which Republican challenger Mitt Romney visibly got the better of incumbent President Barack Obama. Together, the three ingredients reflect the extent to which winning and losing 21st-century debates hinges on the effective summoning of resentment, including the brandishing and use of the proper tools.

The tidbit comes from BBC’s Razia Iqbal who attended a screening of the debate in Charleston, South Carolina, the capital of a Republican state. “There are 200 people in a cinema heckling President Obama, calling out ‘liar’ when Obama talked about energy.”

That partisan passion jumps its banks from time to time is the norm in high-stakes politics, so there’s nothing new there. At the same time, the theatrical framing of American presidential politics has for more than a decade come to be seen, at least tacitly, in terms of the thumbs up, thumbs down template of reality shows. Judges are quick, volatile and caustic. Aggression and manufactured discourtesy are used to manipulate bias and stir up greater public response. Contestants on the wrong side of snap-judgments get no second chances. Absent the ebb and flow of emotionalism, the shows lack bite.

The second ingredient, the newscaster remark, comes from MSNBC pundit Chris Matthews, who after the debate expressed immediate and (self-serving) disdain for Obama’s hesitancy. “There’s a hot debate going on this country and you want to know where it’s being held? Here on this network is where we having the debate. We have our knives out. We go after the people and the facts. What was he doing tonight? He went in there disarmed.”

Never mind the reference to where the debate is being held, since no one network monopolizes it, Matthews is partly right. The American political face-off, both serious and frivolous, is a kind of wannabe gang war involving millions of more or less informed voyeurs courted by the likes of Twitter and nourished into “viral” combat thanks to the instant “publication” of a stream of terse, often insulting jabs. Multi-layered blog warfare, often vicious, is a verbal surrogate for fist fights that got their mainstream go-ahead in 2010, when South Carolina Rep. Joe Wilson rewrote decorum by interrupting Obama’s State of the Union address with a shout of “You lie!” He apologized of course, excusing himself to spontaneity, but many saw themselves in his slashing rancor.

So when Matthews mentioned metaphorical knives he wasn’t far from imagining the damage done by real ones, which by implication means that effective, successful debating, at least as measured by dj-like pundits, demands being able to stand over the combatant and measure their success in terms of liters of spilled blood. In the “You lie!” world, only a brawl makes a mark. Anything less, including real or perceived reticence, betrays the thumbs down ardor presidential politics has successfully drummed into being since the 2000 Florida stalemate. Obama’s bad night — summed up by an unwillingness to attack — was tantamount to throwing the fight. (The New York Times‘ called the debate “civil, interesting and not at all exciting,” putting even civility on the defensive, which it is when excitement is proof of life).

Finally comes the anecdote: A few blocks from my Rome home is a pharmacy whose stocking clerk I know well. He’s a smart man who in his late thirties who hasn’t been able to find any other work except hauling carts of drugs and arranging them on the drug store shelves. He’s not happy but not bitter, either. He has work.

“I really and truly like Obama,” he told me recently. “He’s a smart, reasonable and an incredibly intelligent man. I really hope he’s re-elected.” He then stopped, as if weighing whether to go ahead, perhaps worrying about offending me as an American citizen.

“But, you know, there’s on thing, just one thing, that bothers me. He’s not aggressive enough. He needs to be stronger, to sound stronger. He needs to take the support he has and behave more like a man in charge.”

He said all this lucidly and politely, with informed compassion. He didn’t once raise his voice. He was an emissary of constructive criticism.

The irony of this century, and America’s role in it, is the extent to which the United States has become Latinized, relying on cheap-thrill tempestuousness to make argument seem more palpable and to insist on the necessity of sordid divisions. The knives that kept the European continent at rhetorical and actual war for centuries now flow westward.

Unless knives are brandished and both sides draw blood, a debate, now little more than a public alley fight, disappoints its primal onlookers, whose appetite for winners and losers, victims and scapegoats, has turned unapologetically gladiatorial.