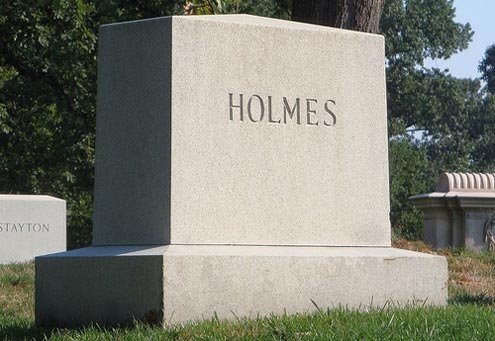 #8220;Oh to be 70 again.” Such was the famous lament of Supreme Court Justice Oliver Wendell Holmes Jr. on his 90th birthday when he saw a pretty girl walk by. The year was 1931. By then Holmes had already been a sitting justice for a remarkable 30 years. He would retire in 1932 and remain effective almost to the last. But the standard he set is not always the rule.

The Supreme Court is a lifetime appointment that doesn’t take diminished capacity into account. Justices have the power, opportunity and inclination to affect legal decision-making whatever their age. Lifetime judicial appointments are constitutionally mandated and protected.

And that is a practice that must end.

Under Article III, section 1 of the U.S. Constitution, the Supreme Court and federal judiciary hold their offices during their “good behavior,” a genteel way of referring to mental competence. In practice, justices are expected to retire of their own volition or to step aside because of incapacity. Holmes, for example, listened to the recommendation of his fellow justices. By contrast, Chief Justice William Rehnquist — appointed to the Court in 1972 — served well into a time of debilitating illness, dying while still a justice in 2005.

Although the pope, the Dali Lama and the Queen of England also have lifetime tenancies, their roles are less directly tied to responsibilities for laws and are significant mostly for their spiritual and ceremonial gravitas (and Pope Benedict XVI broke with tradition and expectations by retiring in February). By contrast, the nine U.S. Supreme Court justices must consistently bring objective intellectual rigor to complex cases. Their rulings produce cultural effects usually measurable in decades, not years.

Americans rightly cherish the years of experience and historical perspective that a sitting justice can bring to critical judgments. But the benefits that come with the onward march of life expectancy are now tainted by the political sweepstakes of judicial vacancy. The judicial branch, once considered the final check on the legislative and executive branches, is now edging closer to the realm of partisan opportunism.

The justices are not at fault. The framers could not have foreseen how long today’s justices would endure and the consequences of such longevity.

It is a sitting president with the “advise and consent” of Congress who fills these vacancies. Increasingly, justices are tying their respective retirements to a specific president’s political convictions. For example, conservative Justice Antonin Scalia, 77, has said he would prefer to not retire during the Obama Administration, while liberal Justice Ruth Bader Ginsberg, nearly 80, is being pressed to do so (if she steps aside before 2016, Obama will name her successor).

The gamesmanship reflects the depth of American political polarization. Given the rarity of vacancies, it is understandable that justices would try to time their exits in a way that helps ensure the philosophical continuity of their beliefs. Yet such maneuvering is remote from the original intention of the constitutional framers, who sought to “insulate” the judiciary from politics.

The men behind the U.S. Constitution believed that the rights of the people preceded the existence of governments, and as a corollary, that those same rights should be protected from government interference. So while the president and congress need each other to approve laws, both remain accountable to the federal judiciary. Although lacking the powers of purse or sword, the judiciary does possess the exclusive power to interpret whether the actions of those two branches are constitutional. A balanced judiciary, whose opinions could be developed and delivered freely, untouched by fear or favor, was essential to constitutional precepts. While constitutional framers envisioned the Supreme Court as attuned to current events, it also sought a detached judicial body that would acquire the experience necessary to rule on difficult national decisions.

Though the principle has mostly held up, politics has made an insidious entry. While justices may resist external political forces, they can still use their life appointments to influence future political philosophy.

No other modern country has judges with lifetime appointments. Even Italy, with its culture of gerontocracy, limits its high court justices to nine-year terms. A similar system has been suggested in the U.S., with staggered 18-year Supreme Court terms that would allow for an appointment every two years. Such a system would give each president the opportunity to appoint at least two justices per term served.

Whether through legislation or a Constitutional amendment, this is an idea whose time has come.

“The young man knows the rules but the old man knows the exceptions,” Justice Holmes once said. So, let us choose wisdom over youth, but let us also be smart about it.