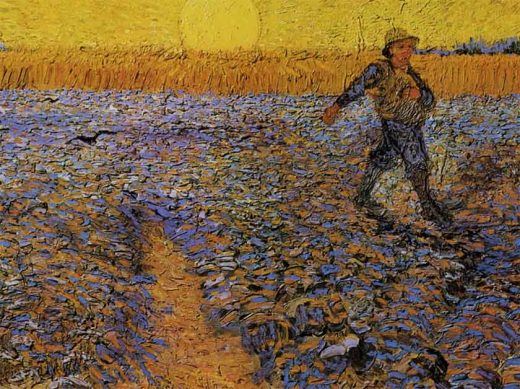 Van Gogh's "The Sower": Farm life in Europe in the 18th- and 19th centuries was brutal, and Italian corn harvesting was no exception.
Y

ou probably don’t think of corn among Italian food ingredients unless the subject of polenta comes up. Even then, Italian corn meal is generally associated with the northern part of the country.

Yet there’s a long history of corn cultivation in central Italy, a history that in Umbria carries with it tales of pain and deprivation.

The life of farmers in Umbria was always difficult. Poor, illiterate, dogged by famine, and virtual slaves to rich landowners uninterested in investing in their properties, farmers often survived on wild herbs, inferior grain and beans —food now reserved for animal feed. Meat, fish and dairy were a rare treat, indulged during celebrations and holidays.

As if things weren’t bad enough, farming life took a turn for the worse in the 19th century with the introduction of corn as a crop. Easy to grow but lacking in essential amino acids —especially niacin — corn soon became the region’s crop of choice, with landlords pushing for increasingly abundant harvests.

As a result, the farmers took to corn as a cooking staple. And their diet deteriorated further, more monotonous and poorer in protein than ever before.

I still recall my Umbrian grandmother resisting polenta and other old corn flour-based recipes. They brought back too many bad memories.

Only years later did I discover that both my grandparents, farmers born at the beginning of 20th century, maize represented abject deprivation. Worse, it conjured memories of pazzia, madness, much of it induced by hopelessly imbalanced diets.

For some three centuries, until the post-World War II period, the farm life diet consisted almost exclusively of corn. Month after month, year after year, corn was at the center of nourishment, with lasting consequences.

The chronic absence of protein and the poor nutritional value of edible plants produced epidemic-size cases of pellagra, a debilitating disease that begins with skin scarring and later triggers mental disorders. Hospitals were packed with demented farmers, and the cause was invariably pellagra from excessively high concentrations of corn.

Sharecropping finally ended in the postwar years, and the improved Italian economy resulted in a significant improvement in farming conditions. Gradually, farmers gained access to proper food, a more balanced diet, and a decent life.

But memories of the misery inflicted by those centuries dies hard.

I don’t remember when I first tasted polenta, but it must have been as a teenager some 40 years ago. And because my family was awash in great cooks and had a variety of wonderful foods at its disposal, corn wasn’t a highlight. In fact (and understandably), it had become unusual.

These days the corn stigma is gone and few speak of illnesses that belong to another era.

Ours is an age of abundance that can cancel out the past. Delicious polenta and other corn-based recipes are now prized. They represent the comfort food of an Umbrian household and are exceedingly popular in restaurants, particularly in winter.

The Brustengolo, a vintage recipe from my home town of Perugia, is fruitcake made from polenta flour with nuts and dried fruit.

Not too sweet, egg-free, gluten-free, and robust, Brustengolo makes for a substantial and healthy snack. It’s basically a baked polenta flavored with the classic Umbrian combination of anise, fennel and orange peel. You can cook the polenta flour before baking if you wish, or simply mix it with water or milk and let it rest a few hours so that it’s fully hydrated and digestible.

You can alter the proportion of nuts to dried fruits and add diced apple for added moisture. A Brustengolo is dense but shouldn’t be stodgy. Make sure to cook it thoroughly and don’t make it thicker than two-thirds of an inch.

I use quick-cooking polenta but finely ground cornmeal is another option. If you opt for the latter, add hot milk and let it sit overnight.

For a vegan version, use water or vegetable milk instead of regular milk.

Perugia’s Brustengolo: Polenta with a sweet side.

— Mix polenta flour, sugar and milk and let it sit as explained above. The mixture will initially be fluid and will eventually set like a thick porridge.

— Bake in middle of the oven for 40 minutes, or until dry and golden around the sides. Cool the brustengolo in the pan on a rack.

— Serve at room temperature, accompanied by a hot drink or mulled wine.

This recipe serves 3-10. A small wedge goes a long way.