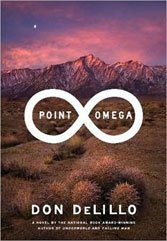 In DeLillo’s contrived “Point Omega,” a minimalist rumination on the outlines of intelligence and reality, an aging intellectual-cum-Pentagon-advisor named Richard Elster escapes Iraq War Washington for the California desert (a “spiritual retreat”), where he’s joined first by a young would-be filmmaker-biographer Jim Finley, the narrator, and later by his daughter Jessie, who inexplicably vanishes.

The book’s centerpiece conceit, its opening and ending, is Finley’s impression of “24-Hour Psycho,” a big-screen, slowed-down version of the Hitchcock classic hosted as a conceptual art piece at the New York Museum of Modern Art in 2006. The midsection, the narrative meat, covers the repartee between Finley and enigmatic Elster, who is DeLillo’s hybrid Paul Wolfowitz-Robert McNamara-Rand Corporation “defense intellectual” (“I wanted a Haiku war…” says Elster. “I wanted a war in three lines…”).

Finley is pushing Elster to agree to make a documentary in the vein of Errol Morris’s “Fog of War,” in which Bob McNamara confessed his Vietnam. The sphinx-like Elster piques Finley’s eagerness by calling Iraq “a little whisper” and speaking mystically of “something coming”; “matter wants to lose its self-consciousness,” he say, parody doubletalk for latter day doomsday, or “the omega point.” As Elster presages a return to the inorganic, humanity seeking to be “stones in a field,” his nearly inorganic daughter, the “barely breathing” Jennie, enters the narrative, distracting filmmaker and father alike. The “dumbfounded cartoon child” promptly vanishes into the desert.

Suddenly, the man who swore by stones has his “grand themes funneled down to local grief, one body, out there somewhere, or not.” Point Omega becomes a vanished daughter. “The story,” reflects Finley, “was here, not in Iraq or in Washington…” Fair enough, but DeLillo doesn’t give Finley, Elster or even Jessie enough oxygen to transcend their pawn-like roles in what amounts to eloquent but ultimately unsatisfying examination of reality’s facades.