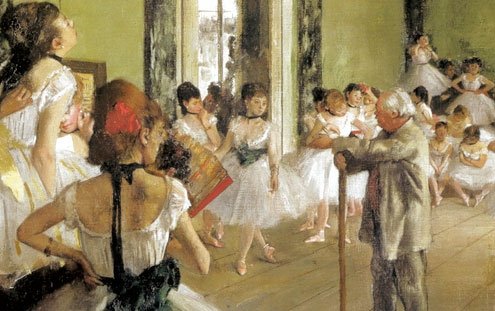 Detail from "The Dance Class" by Degas.
F

ew relationships have been as enduring as the one I’ve had with dancing. Though it has been with a verb and not a person, the liaison has been no less tenuous or complicated.

I trace my first memories of dancing to Catholic elementary school. I’d wait breathlessly for the annual spring Father-Daughter dance. It was, quite simply, an event. My mother would take my twin sister and I shopping, which would inevitably lead to a dramatic show of tears in the dressing room when I couldn’t find a suitable dress. Appointments for (blue) nail polish manicures and updos followed, and I was allowed to wear a dab of my mother’s Tommy Hilfiger perfume.

For the other girls, it wasn’t much of a dance. They’d dash along the school’s corridors, dark and mysterious at night, while their fathers loosened their ties and talked about the Boston Red Sox or Clinton Administration while sitting on plastic fold out chairs.

My father was the exception.

For three hours straight, we twirled and leapt and jumped and shimmied. He gave my sister and I equal time on the beige, Formica floor of the cafeteria-turned-dance floor. Afterwards, we’d have ice cream sundaes with hot fudge and I’d promptly fall asleep on the ride home, my feet pleasantly achy. A beaded mermaid necklace, a party favor from my third-grade dance, still hangs in my jewelry box. I’d don’t have the heart to throw it away.

When I was eight, I announced I wanted to begin ballet classes. I had seen a pink chiffon skirt at JC Penney and was told only ballerinas wore it. The day my mother had always dreaded had arrived. Temperamental Russian teachers, tulle, and a strict diet had consumed her childhood and teenage years. Now one of her daughters wanted the same. My first ballet teacher was Ms. Garance, a tall blonde from Holland who wore her tights over her leotard. Looking back, she could’ve been anywhere from 16 to 35. Age is malleable in the mind of an eight-year-old girl. I learned to glissade and plié, passé and chaine, arabesque and pas de chat. I was complimented on the natural arches of my feet and told I’d one day take to Pointe shoes — the first three toes on each foot were nearly the same length. Balancing would be easy.

My debut was as a courtier in the school’s spring recital production of “Cinderella.” In the photos taken beforehand I look solemnly at the camera, thin arms raised into an oval above my head. Encouraged by my progress as a beginner, I was told to audition for the school’s pre-professional company. I had a number pinned to my leotard and executed exercises at the bar along with floor routines in front of a panel of judges. When my acceptance letter arrived, a tremor of fear and excitement made my stomach turn cold. I doubled, tripled, and quadrupled my lessons. I spent every Friday night at company rehearsal, the smell of hairspray and Subway sandwiches lingering in the dressing room. I was a bluebird, a clown, a mirliton, a Spanish flamenco dancer, the Sugarplum Fairy, Tweedle Dee, a dove. Bobby pins were found in cupboards, in between seats, on the floor of my parents’ car, in the washing machine. I could apply false eyelashes in my sleep and spent Sundays padding noisily about in my Pointe shoes to soften the soles. I was no longer available for birthday parties or movies, or sleepovers.

When I enrolled in middle school, Father-Daughter dances had been replaced by boy-girl socials, though still held in the same cafeteria. Derek Rotondi asked me to dance, his hands placed squarely on my shoulders, arms stretched and taut in front of him, and we rocked back and forth awkwardly while he asked me if my best friend was interested in him. The rest of the night I ate pretzels and drank punch and made frequent, unnecessary trips to the bathroom to re-apply my lip balm. It was my first and last dance.

As I grew older, dancing stopped being fun. I was shy. I never went to prom. The thought terrified me, and even imagining dancing at a family wedding made me queasy. I wasn’t sure how it worked. Ballet was no longer the same — at a certain point my spins never got faster, and my leg only went so high. “You’re not consistent,” my director yelled at me once, her voice echoing from the black hollow of the auditorium onto the stage. My parts diminished. Younger girls were praised and their names carefully written at the top of the casting lists taped to the mirror.

My final performance I was cast as a handmaiden instead of the Lilac Fairy or Aurora. I was strangely relieved. College was coming soon. I stopped ballet and took up the cello. I played horribly, then a little better, and then okay. I watched my thighs fill out and soften and forgot about my perfect long toes. I learned two languages and studied in Italy. I had a boyfriend.

Now, dancing has been reintroduced, but slowly. I suppose I’m catching up. A glass of wine or two are usually involved. I recently attended a graduation party in Vetralla, near Rome, and the evening closed with a good bit of dancing. I wasn’t very coordinated, and my rhythm could be better, but I wasn’t too bad. That night, the beaded mermaid necklace swinging, I may have looked like someone else — my eight-year-old self.