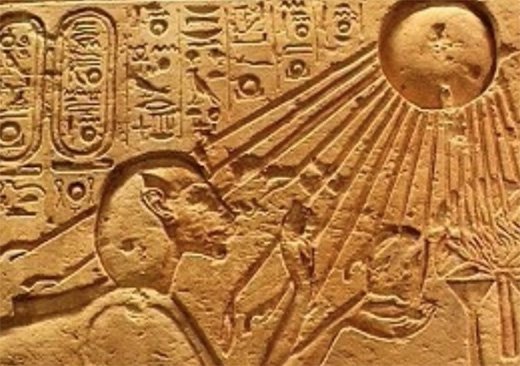 The ancient Egyptians suddenly put aside their pantheon of deities and turned to the sun.
I

thought worshipping the sun was an original idea. Far from it. In the ancient Egyptian city of Amarna, the pharaoh Akhenaten elevated the concept to a religion. Ruling in the 18th Dynasty in the year 1336 BC, he famously replaced worship of the traditional Egyptian deities with a single principle: reverence for the light of the sun. This God was called Aten.

I discovered this quirky historical information after a chance encounter with a man on a New York City subway platform.

It was the dead of winter, dark and cold, and I was waiting for a train to arrive.

Suddenly, my eyes met those of a tall young man also waiting on the platform. He wore a business jacket with a name tag. Unprompted, he walked over to me expectantly with a question. “Do you speak Spanish?” he asked.

It seemed an odd query since he spoke to me in flawless English and my looks are are best described as Germanic.

As he looked to say more, I realized his question about Spanish was just a way to break the ice. He had a different motive altogether.

I discovered quirky historical information about Egypt’s veneration of the sun after a chance encounter with a man on a New York City subway platform.

“I’m here as a volunteer,” he said. “I’m from Utah and I’m asking people questions about what’s important to them.”

Slowly the pieces began coming together. He was a Mormon on a religious mission in New York City. I watched him mentally leafing through his prepared scripts to find one he could try on them. I was curious what he’d say next.

“Do you believe in God or are you spiritual?” he asked.

“No to both,” I said simply. He didn’t seem surprised. One in four New Yorkers identify as non-religious, so I’m sure he heard this often. Undaunted, he had a follow-up handy.

“Then what is it that gives you direction in life?”

I took a moment to ponder this. What was it, anyway? And then, in the depths of the subway tunnel, it came to me.

“The sun,” I replied smiling. “Yes, it’s the sun. It comes up every day and sets every night. It’s something I can always count on. East and west, it gives me direction.”

I felt proud of my reply, but he looked confused.

“Like the winter solstice,” I continued, trying to elaborate on my newfound love. “It’s the shortest day of the year and the sun sets incredibly early. But then the days begin to get longer and I find it so hopeful and encouraging. I know that spring won’t be far behind. It’s the earth’s rotation around the sun that brings us spring.”

My view of the sun and cosmos seemed to have caught him entirely off guard and he went off script.

“I know what you mean,” he said. “In Utah, we have these amazing red mountains and when the sun sets behind them, there’s a warm glow on the rocks. The sky also turns radiant orange. I miss that here in the city. I’m also longing for spring.”

The reverie he entered into appeared to take the wind out of his mission speech. He now looked sullen and wistful.

As the train approached and we both walked on, he said no more. I suspect he found greater truth in my sunnily sincere answer than he had considered before.

Ancient Egypt with its pyramids and mummies may seem like a civilization with nothing, aside from dusty pyramids, to offer the modern era. But I beg to differ. When winter is at its thickest I find more meaning and value in the qualities of the sun than in any religious text. It’s about certitude. Knowing the plants will flower and the trees will green again herald revival and continuation of life.

Thinking back, I may have given the Mormon missionary the wrong answer. Perhaps I do believe in God. And if so, it is Aten. The pharaoh Akhenaten would most definitely approve.