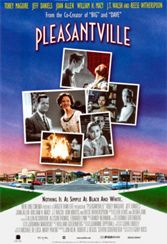 Teenager David (Tobey Maguire) escapes 1990s tedium by watching a 1950s sitcom called “Pleasantville.” Ah, the simpler life. When he gets into a fight with sexually precocious sister Jennifer (Reese Witherspoon) the TV sparkles (it’s just been repaired by… Don Knotts), and, presto, they’re both in black and white America.

Gary Ross’ charmer has a “Back to the Future” pedigree but wants different things. Neither retroed-teen particularly likes the black and white life (despite “Leave it to Beaver” parents), so this is less a hamming up of things past that a low-keyed debunking of an America that never existed. But it’s how Ross manages his time machine that makes the film unique. David and Jennifer (turned Mary-Sue in Pleasantville) gradually cause enough trouble to tip their would-be idyllic world on its side. And as Pleasantville’s stock characters shuck their one-dimensionality and accept that they have a choice, they’re transformed into… color.

The conceit is so simple but so whimsically smart that it instantly shatters cliché. The irony then becomes how the modern teens can regain their color, which is literal back to the future. Ross holds them to growing up: meek David must defend his Pleasantville mother; Mary Joe actually has to read a book. Maguire and Witherspoon are delightful, as are retro parents George and Betty Parker (William C. Macy, perfectly cast, and Joan Allen).