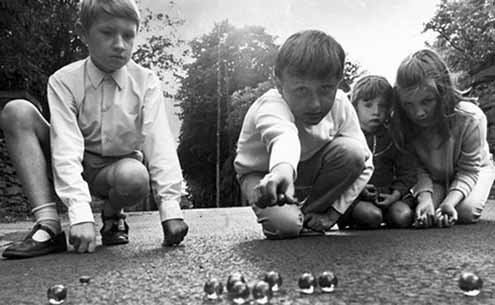 Marbles of the mind…
I

passed high school physics thanks to a seesaw. I played on the playground with my (skinny) best friend. We couldn’t use the seesaw together because I was heavier: I just went down, boom, and she just sprang up, and so we stayed. But I really wanted to seesaw. Wiggling around on the wood I realized that the dynamics of balance changed the closer to the center I got. If she sat further out, we could actually go up and down. Levers.

I was usually alone — we lived in the woods — and didn’t know how to play “marbles,” but I did manage to use them in my own way. Our fireplace had a brick hearth and I’d sit on it and pretend the mortar between the bricks represented streets, and the bricks themselves houses. The marbles represented people rolling on the streets. In my imagined world, I lived in this neighborhood with lots of kids. Marbles roll in certain ways, and when one hits another the impact is transmitted and carried forward. Vectors.

I found a couple of magnifying glasses around the house and played with them, too. I never could start a fire by focusing the heat of the sun, but I did notice how they bent the light. Optics.

I played with water, making waves and patterns in puddles that reflected in the sunlight after a storm. Waves.

I threw balls into a basket that was nailed to a tree. Trajectories.

By the time I took physics in my junior year in high school, I had at least an intuitive grasp of levers, vectors, optics, waves and trajectories. It wasn’t much but at least the concepts made sense, and while I suffered (and still suffer) from what today would be called probably dyscalculia so I couldn’t do the problems – I passed. Why? Because I played. Just played, with no other purpose but to entertain myself, to explore, and to have fun. (An educational specialist friend of mine said I was lucky I didn’t grow up today, when my dyscalculia would have probably landed me in even more hours of math and less time for art and music.)

The way play teaches kids is neither its justification nor its purpose. It doesn’t need any justification and its purpose is enjoyment. Kids play instinctively and that instinct is as useful to humans as the instinct to play and fight and hunt mice is for kittens. Kittens don’t pounce because they want to learn to hunt, they do it instinctively, and adult cats continue to play with mice even when they don’t need to eat them. It may end up helping them hunt better, but that’s not why they do it.

Our millennia of evolution have brought us to like to do certain things that serve important long-term functions. But that’s not why we do them. We do them because we enjoy them. The same way we eat food because it tastes good.

The justification for kids having time to play is that it’s fun. It’s instinctive. It’s a fundamental right in the same way making time for our families and friends (and time to rest and recover) is a fundamental adult right. Take that away, and you have slavery and oppression.

If you have an office job you’re supposed to get paid overtime after hours. The incursion of work into our home time (through emails and other work we can do by computer, and therefore are expected to do) is not merely an annoyance. We consider it an unfair vexation that intrudes on our leisure time, time otherwise spent with our families and friends. It reduces us to drones.

But how many adults who complain about too much overtime are adamant in insisting that children be given sufficient homework in school?

These kids sit in classrooms for six-to-eight hours a day, quite a lot for a lively child that needs to run around. Then they’re given a couple of hours of homework. (Even when it’s actually very little, after a long day sitting and concentrating, most kids thrash and writhe and homework takes three times as long).

A recent article in Italian media discussed the effort of some schools experimenting with new teaching methods to help cut down the amount of homework. The effort apparently annoyed a great many parents. I’d like to assign them a couple of after-hours work and see how they react.

Maybe the whole purpose of homework is to create a generation of adults who’ll consider constant work normal. Over time, these people will no longer consider leisure a right. Homework will have won a pyrrhic victory.