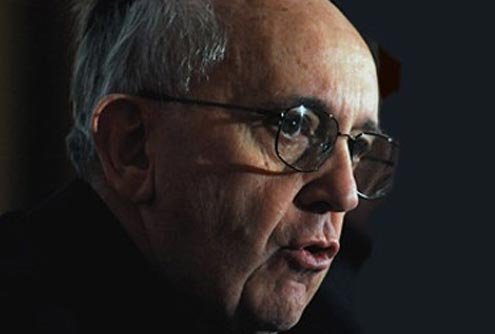 Francis I of Argentina: A wise but cautious choice.
T

he Roman Catholic Church has suddenly transformed itself into a likeness of the International Olympic Committee or FIFA — or for that matter any global body that seeks a judicious geographical balance in its choice of venues and appointments.

Fine. Fair enough. Western Europe — witness the Olympics in their prewar heyday — was twice served. Apparently the time had come, in the view of so many crusty cardinals, to push the papacy overseas, to Argentina, to a man from “elsewhere,” which shuffles the deck, albeit slightly.

Call it continental drift, though a little late, at least for devoted South America.

On paper, an Argentine pope — his identity aside — seems like a wise and potentially useful idea. There’s language: Most Catholics speak Spanish, and the north-to-south turbo power of Latin Catholicism. It has been and remains at once fervent and complex, devotional and political. Spanish-speakers tend to embrace Catholicism no questions asked (the latest controversies more ideological than sexual).

First impressions are inevitably tricky but still possess the turbulent and quickly dissipated virtue of immediacy.

Seen up close, Italo-Argentine Francis I is a humble man, one at first visibly overwhelmed by his new status, upright in the extreme, almost frozen.

Second, he emerged from that same frigidity to say some sweet things (yes, it matters), including suggesting he’d been fished from the ends of the earth — nice touch — and asking his audience to pray for him.

Not quite John Paul I, who broke the papal “color” line by speaking in the first person, or John Paul II, who addressed Rome crowds as if he owned their emotional and sentimental weaknesses (“If I make a mistake [in Italian] you’ll correct me…). But better, certainly, than Benedict XVI in 2005, a man impatient with his hard-earned balcony, and who in a moment was gone, hardly a word spoken.

The former Cardinal Jorge Mario Bergoglio, who at times resembled an aging Hugh Laurie (of “House” fame), seemed by contrast an in-between figure, one who at quick glance looked more perplexed than openly pleased, suggesting the selection of yet another compromise figure — as happens in the nervous College of Cardinals, which tends toward bickering and rarely grants much papal leeway (making both 1978 choices all the more astounding).

To some, he’s something better than the lesser of evils; to others he’s a necessary piece of Spanish-speaking Catholic machinery that for centuries had been on the outside looking in.

Advantages. Nationality and language are obvious. He’s also a Third World figure, though the phrase has lost most of its meaning. He’s certainly an extension of the more obvious aspects of Church geography, previously limited to north Atlantic states.

Disadvantages. When the honeymoon celebration ends, Jesuit Bergoglio remains a past-middle-aged man (no fault of his own), well into his 70s in fact, who has been called to lead a faith and institutions that badly need a swift shot in the arm, if not a papal crutch to lean on.

Those needs, in retrospect, make John Paul II’s elevation all the more astonishing: a 58-year-old thrilled-to-be-pope Pole, a Miss Universe in an age dominated by Italian septuagenarians, and a man who hadn’t even chose the priesthood until his early 20s. He shattered all that was known, as least as it regards predictable papal perception, which this choice does not.

Whether Francis I can do the same as John Paul II — possess and transmit the same infectious impact, doctrinal issues aside — is a facile question. He can’t. Aside from failing to rank in the media top-10, he’s a familiar figure to those in the know. Based on age, though age means less than it did 50 years ago, he’s another transitional pope with an active shelf life of a dozen years.

He does, however, produce a final and not insubstantial note, both for now and the immediate future: When it comes to Catholicism, do not underestimate the power of the Spanish language.