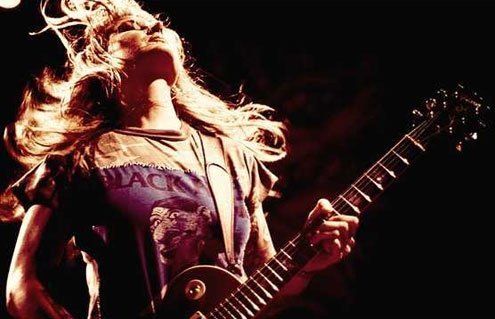 Guitarist Laura Pleasants of Kylesa. "Ultraviolet" (Season of Mist) is the sixth album
I

f loud rock is your flavor of choice, consider May a bountiful month and start the applause with Savannah, Georgia veterans Kylesa and their sixth full-length album, Ultraviolet (Season of Mist). Anyone who likes it noisy will gush over this record, in part because it’s aggressive without being cornered by genre. Coming together are traces of doom, healthy helpings of post-hardcore, a crusty tinge of punk, and plenty of melodic Southern rock.

Kylesa’s sound is easy to grasp but tough to duplicate because no one instrumental element sets them apart. Dual drummers were once their main attraction. No longer. Ultraviolet now ignores that novelty even more openly than 2010’s commendable Spiral Shadow. Though there are plenty of heavy riffs, Ultraviolet is an album of texture as much as straight-ahead power moves.

Guitarist Laura Pleasants takes center stage on several songs and leads a few more forcefully than in albums past. But she can also remain indistinct, ethereal accompaniment to otherwise heavy tracks like “Unspoken” or “Vulture’s Landing.”

The strenth of Ultraviolet is how it makes the band’s versatility approachable.

Speaking of approachable, the decade-long worldwide love affair with electronic dance music seems to be reaching critical mass. A backlash is due and I have a band in mind to lead the way: Meet ASG. They’re bigger than they’ve ever been and, thanks to backing from a high profile label, they’re about to get bigger.

At least, that’s what the Wilmington, North Carolina quartet is hoping for on their fourth album, Blood Drive (Relapse). Listening to this record is like listening to mid-90s alternative-rock in a world where Alice in Chains, not Nirvana, was the template for all subsequent copycats. The rock is hard, but Jason Shi’s vocals are clean. As metal goes, it’s fairly amiable stuff.

Maybe that sounds like a jab, but a song like “Day’s Work” is exactly the kind of thing I wished I’d heard on North Carolina corporate rock radio (before I left). The chugs are there for the meatheads, but there’s also psychedelic meandering, plenty of solos, and top-notch mixing behind the boards from Matt Hyde and Phil Caivano.

But as expansive as it feels, none of Blood Drive‘s dozen songs are north of four minutes. ASG exudes the efficiency and comfort of a band that’s been at it for more than a decade. It’s remarkably consistent in many ways and refreshing for exactly that reason. If you miss metal before it got too “nü,” this is your album.

A variation on the same theme comes courtesy New York trio Survival, together on their first self-titled record (Thrill Jockey). Like ASG, these guys have been playing together for years (though more sporadically). They also have a deep appreciation for 1990s American alt-rock.

Unlike ASG, they emphasize different aspects of the period. It doesn’t take much of opener “Tragedy of the Mind” to recognize the tightly coiling lines of frontman (and Liturgy mouthpiece) Hunter Hunt-Hendrix’s guitar as a throwback to the heyday of math-rock. Echoes of Hoover, Polvo and Drive Like Jehu can be heard on songs like “Second Freedom” and “Our Way.”

Yet it’s also telling that bands name-checked in the Thrill Jockey press release include Black Sabbath, Creedence Clearwater Revival, and The Smashing Pumpkins. There’s a conscious element of prog-rock in these jams. Though they sound tight, Hendrix’s soaring, distant vocals remove some of the piercing immediacy of the guitars and Greg Smith’s relentless drumming.

It’s a risky bait-and-switch, but Hendrix, Smith and guitarist Jeff Bobula pull it off because they play it straight. Delivered with little fanfare, the power of Survival speaks for itself. Loudly.