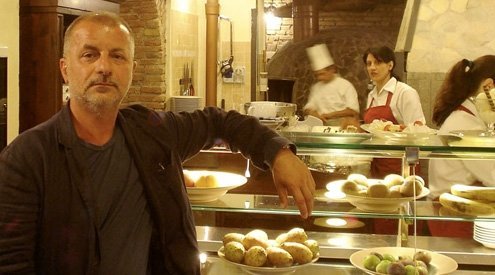 Filippo at the Taverna Rossini.
W

ith the recession getting spicy, restaurant owner Filippo got wise. “Now we don’t close any more,” he told me. Not quite, but I got his drift. Enough half-day Roman silliness, with mid-afternoon lunches and dinners limited to the after-8 crowd. Filippo was going total. He’d serve anything you wanted — pizza or a snack — from Noon to 1 a.m.

Filippo once played rugby. His smile-resistant features qualify him as hardscrabble’s spokesman. He already owned a bar when he opened his pizzeria-next-door in affluent north Rome a decade ago. It took time, but neighborhood’s fussy clientele gradually edged his way. He was helped by the indoor smoking ban. Dozens of tables migrated to a fashionable place under red-tinted halogen heat lamps. Reasonably priced pizza didn’t hurt — the wealthy love cheap eats.

He upped the ante in 2006 by opening a fish restaurant next door to the bar and pizzeria. But glam came with a price tag. The slabs of dead-eyed bream got few pickup lines.

Filippo thrives thanks to the pizza crowd, tourists and locals. Walk into his place at 2 p.m. or 10 p.m. and you’d think the global economy had just gotten a raise: Not a free table in sight, and he has more than 250.

But he reads the headlines, so do his on-the-job kids, and alarmism is the most addictive flavor. He humors it by cashing in.

It’s a strange recession, this one. The hurt is all around, or so one suspects, but the global middle class buffer — a postwar invention — creates ample breathing room between downturn (it’s out there) and “brother-can-you-spare-a-dime” misery. When FDR took office people stood in breadlines. This time you spend less or move in with your in-laws. Capitalism’s debt mojo has given post-Depression generations a leg-up on marathon dancing.

In essence, Italy’s current national crop of thirty-somethings represents its first fully enfranchised middle class — which isn’t to say some of its emissaries don’t call Mommy home. It’s the first able to recognize recession as a threat, and not a peasant variation on inevitably hard times. It’s also the first with mortgage payments onerous enough to demand thrift. Which only intensifies the gospel of brooding.

Countries sentimentally prone to optimism can extract diamonds from their messy rough, witness Barack Obama. Traditionally pessimistic ones weave bad news into the fabric of established cynicism, putting individual shrewdness where it belongs — ahead of the collective anything. Italy hasn’t had an ambitious class since Filippo’s generation fled to the city.

These people give Filippo his traction. They’re ready to work, eager to earn. They want out of their past in much the same way that the indigenous Italian peasant class sought relief from illiterate rural life 50 years ago. When Filippo says he’s not closing what he really means is that he has an incentive-sensitive staff. It’s an un-Italian arrangement in which both sides win.

What about the Italian middle class? Well, car sales are down but the sky’s the limit for lottery tickets, video games, and mobile phone. No surprise in a TV-driven values system that likes chatting and chance.

According to a report by the country’s national statistical institute, Italy badly needs a “second metamorphosis,” like the 1945-75 kind to which Filippo belonged. Italians need to stop popping anti-depressants (a newish fad) and get back to scheming, known in the report as “original thinking.”

A hard-knocks kid of the first metamorphosis, Filippo gets it. So does his supercharged immigrant labor. Yes, they do. It’s a get-rich, no-quit energy that refuses to succumb to the Zoloft collective. The new Italians, well-versed in hard times, are impatient with their status quo. They’re too busy to bitch.

They’ve seen the future, and pizza’s the sparkplug.