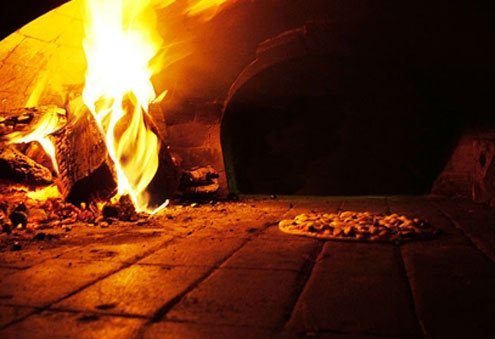 At the Palumbo house, it's make your own pizza.
&

#8220;Don’t stuff yourself at breakfast,” my brother-in-law advised me before we went off to meet his girlfriend’s Italian-American family in Rhode Island, “the Palumbo family makes enough to feed an army.”

Raffaele Palumbo, known as Ralph, immigrated to the United States from Italy as a teenager. We got to their home on a Sunday, the traditional lunch day for the family’s kids and their own families, and Ralph’s wife Marie greeted us at the door. In the back yard, a table by the pool brimmed with trimmings and a wood-fired oven raged nearby.

The highlight of the family lunch is pizza, which the Palumbos make from scratch thanks to the concrete outdoor oven, a rare item in American homes. Basically, guests line up and pick from toppings that include chopped mushrooms, tomatoes, mozzarella, onion, olives, tomatoes, salami, and pepperoni.

“It hits 600F in there,” one of Ralph’s sons told me with pride. The oven has a typical cast iron door at the front. According to Palumbo family tradition, guests grab a doughy pizza base, pick their favorite ingredients, and cook their own pie. It’s so much of ritual that no one asks questions. The Palumbo DNA is as Italian as… pizza.

Ralph sat beside me and made it a point to speak to me in Neapolitan dialect. “Hai messo la pummarola in coppa?” (“Did you put tomatoes on the pie?”) He continued with Italian throughout the meal, which seemed to delight him, and me.

After his father’s death, at 14, he moved to the U.S. with his mother and grandmother. He went to school and eventually became an accountant. He’s been married to Marie for 41 years and they have three children.

Ralph made his own pizza last. Lindsay, my brother-in-law’s fiancé, told me that her grandfather always worried about running out of food and would wait for guests to fill up first. Uh oh, I told Ralph jokingly, looks like we might not have enough. Everyone started laughing. Not Ralph. He immediately asked Marie to get me more.

The meal was capped off by an array of deserts, including Boston cream pie, tiramisú, and a chocolate birthday cake (never mind that it was no one’s birthday), all of them bought from gourmet bakeries on Boston’s North End, known for its fine Italian food. The Palumbos made me feel at home.

But pizza wasn’t my only Rhode Island delight. I love the state’s lobsters, which the fishing industry supplies in abundance, live and fresh. Lobsters generally go for $9 a pound, which for an Italian is like paying $10,000 for a Ferrari. On average, lobsters in Italy run €35 a kilo and most are frozen.

My own favorite is pasta and lobster meat, specifically spaghetti or linguine (flat spaghetti) with tomato sauce. So, if you don’t have a pizza oven handy, try this.

¶ Chop the shallot and the put the pieces in a deep pan along with the diced garlic cloves, frying them together in the olive oil.

¶ Take the lobsters, which you’ve previously cooked in boiling salt water (live lobsters are ideal but frozen ones can work), and use shears to cut them in half, back first. Use a nutcracker to snap off the claws so that the meat drips its savory juices into the pan containing the fried shallots.

¶ Cook for a few minutes, gradually blending in the white wine. Then, add the thick tomato sauce, into which you’ve mixed a teaspoon of instant fish stock.

¶ Cook over medium heat letting the sauce dry and occasionally turning the lobsters. In the meantime boil the spaghetti.

¶ Just before the pasta’s ready, remove the lobster from the pan and place each half in a dish. Add the parsley sauce.

¶ Cook the al dente spaghetti in the pan containing the sauce, garnishing the dish by surrounding each half lobster with spaghetti and chopped parsley.