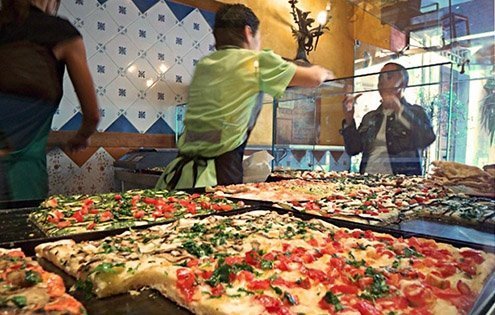 An unexpected career change.
A

decade ago, a nearby neighbor ran a thriving Rome construction business that remodeled homes and refurbished offices all over the city. He worked out of a basement hole in the wall not much larger than a closet where I’d see him burning the midnight oil on an old computer. The room’s ceiling neon had a kind of Hollywood torchlight effect that seemed to mesmerize local pigeons. They’d coo in bunches from nearby trees and ledges as if somehow in cahoots with the late night industry. When we chatted he’d inevitably bemoan his hours. He had a family of five. But work was work, he said.

Increasingly, I passed by my neighbor’s basement office to find it dark and locked up. I missed the aroma of cigarette smoke that poured out of the once-buzzing den.

My neighbor had often told me that construction was his only “gift” and he’d stick with it until he retired or dropped dead of a nicotine-induced coronary. In 2003, when I first met him, all of Europe stumbling into a dimly lit basement was hard to imagine, but it did. It regressed rapidly and populist politics arose as an angry form of mourning. Many thought the woes must be someone else’s fault, like Germany’s of the 1930s, and blamed it on alien interlopers let loose to wreak havoc. Disenchantment never changes its lyrics.

For a few years I saw little of my neighbor, not even at the cigarette store. I asked around but got nothing aside from rumors of debt.

Then, two autumns ago, while on my way to a neighborhood restaurant I saw him in front of tiny kitchen shop that sold pizza slices (pizza a taglio), a bit like an enlarged New York City vendor cart but built into a wall.

How did he know it? He’d bought the shop and started making pizza. He took a class in Naples, returned to Rome, and invested in transformation. “From concrete to dough,” he said.

The small business worked. Not like big business, mind you, but it paid the bills. What began as an experiment eventually found its footing.

Now I see him every second or third day when I go shopping. He’s camped in front of the shop dressed casually and talking on his phone. He looks like a character from a 1950s Fellini movie, the kind parked in town piazzas for hours at a time talking soccer and food and girls and money and more soccer. Sons and daughters enter the picture more these days, as do their dependent demands and frustrations, most focused on the impossibility of finding work in a city that would seem ripe to hire millions. So much is broken and in need of repair yet millions still live off their parents true to the Fellini 50s.

My neighbor and his lead chef, a portly Egyptian, take cigarette breaks and watch the locals come and go. His shop is next door to the coffee bar. He calls everyone by their given names. Stories are swapped and pets petted. It’s small-town Italy near a big piazza in Rome.

“I never thought I’d be doing this,” he told me one day, “but life means having to adjust. It’s a shitty country.”

Except for the pizza.