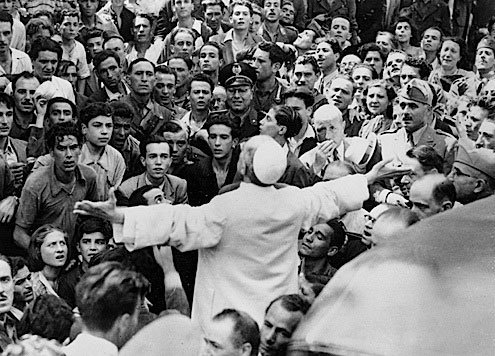 Pope Pius XII on the cover of Time magazine, above, and in a famous pose, with a sparrow on his finger.
I

n recent years, the often-repeated allegations that Pope Pius XII was “silent” during the Holocaust, actively “collaborated” with the Nazis, and “didn’t lift a finger” to help the millions of Jews who were deported to the death camps have been gradually discredited.

Scholars of different nationalities and faiths, including the Rev. Pierre Blet, a Jesuit; historian Ronald J. Rychlak; Rabbi David Dalin, and Winston Churchill biographer Martin Gilbert, have persuasively made the case for Pius XII. Even John Cornwell, the author of the best-selling “Hitler’s Pope: The Secret History of Pius XII,” has withdrawn some of his more extreme charges against Pius XII and now admits that Vatican-led efforts saved many Jews. Decades of negative publicity, emotional attacks, and wild charges have failed to impress the Vatican, which is moving forward with plans to beatify the wartime pope.

In December 2004, the pope’s detractors, both inside and outside the Catholic Church, thought they had finally found a “smoking gun” that could permanently derail beatification efforts. They accused the pontiff of refusing to return baptized Jewish children, who were sheltered and protected by Catholics during the Holocaust, to their surviving relatives. These latest allegations were swiftly dismissed.

The latest controversy began on Dec. 28, 2005 when Alberto Melloni, an Italian scholar and the co-director of the John XXIII Center in Bologna, published an article in Corriere della Sera reporting the existence of a 1946 document in which the pope told Monsignor Angelo Roncalli, the papal nuncio in France and future Pope John XXIII, that the Church should keep custody of baptized Jewish children. News agencies immediately picked up the story, giving it global reach.

A copy of the document that Melloni discovered was leaked to The New York Times and published in translation on its web site on Jan. 9. It states that baptized Jewish children should not be turned over to Jewish agencies that would not be able to guarantee their Christian upbringing, and that such children should also be withheld, even if their parents ask for them. A notation at the bottom of the document reads that this decision “has been approved by the Holy Father.”

Abe Foxman, the national director of the Anti-Defamation League (ADL), publicly called on the Vatican to stop its plans to beatify Pius XII, open its wartime archives and release all baptismal records from the war. Although he had no evidence, Foxman wrote a piece in The Palm Beach Post suggesting that the Vatican must have sent similar instructions to other countries. Daniel Jonah Goldhagen, the author of the notoriously anti-Catholic book, “A Moral Reckoning: The Role of the Catholic Church in the Holocaust and Its Unfulfilled Duty of Repair,” published articles in The New Republic magazine, London Sunday Times newspaper, and the Israeli newspaper Ha’aretz attacking the Vatican. He also called for an international commission to investigate how many Jewish children were “kidnapped” by the Catholic Church in Europe.

From the outset, however, the story looked suspicious. Evidence in the public record for decades seemed to undermine the controversy. Pius XII himself was on record as pledging that the Church would return Jewish children, baptized or not. In September 1945, Dr. A. Leon Kubowitzky (later Kubovy), the secretary-general of the World Jewish Congress (WJC), personally discussed the issue with the pope. According to the book, “Unity in Dispersion: A History of the World Jewish Congress,” a collection of the organization’s reports published in 1948, Kubowitzky was “given assurance [by the pope] that a most humane policy would be followed in this delicate matter.”

In March 1946, Pius XII granted an audience to Chief Rabbi Isaac Herzog of Jerusalem, who was seeking the return of an estimated 8,000 Jewish children living in Catholic institutions in France, Poland, Belgium, and the Netherlands. An article in Jerusalem’s Palestine Post published after the meeting reported that Herzog “had the Vatican’s promise of help to bring those children back into the Jewish fold.”

Did the Catholic Church return the children, as the pope promised?

In his 1967 book, “Three Popes and the Jews.” the Jewish scholar Pinchas Lapide quotes Kubovy, in 1964, as saying, “I can state now that I hardly know of a single case where Catholic institutions refused to return Jewish children.” In an interview published last year in the Israeli newspaper Ha’aretz, Serge Klarsfeld, the French Holocaust survivor, Nazi hunter, and author, disputed the allegation that the French Church kept Jewish children. (As for Melloni, he admitted that he had no figures on the number of children prevented from rejoining their families.)

There is evidence that Pius XII himself intervened in several cases.

Author Peter Hellman, in his 1980 book “Avenue of the Righteous,” tells the story of Leokadia Jaromirska, a Polish Catholic woman who saved the life of a Jewish girl and was subsequently honored as a “Righteous Gentile” by the state of Israel. After the war, Jaromirska was unwilling to return the girl to her Jewish father. Jaromirska wrote to the pope, asking his permission to keep custody of the child whom she was raising as Catholic. “She was instructed by the pope to return the child to its father,” Hellman writes. In fact, the pope told Jaromirska that it was her duty as a Catholic to return the girl and to do so in goodwill and friendship.

Is the papal note to Roncalli a hoax? Was Melloni deceived, as Der Stern was over the fraudulent Hitler diaries? The Rev. Peter Gumpel, a Jesuit, the Vatican official who is serving as the independent judge for the cause of Pius XII’s beatification, told the press that no copy of the document, which is a 28-line memorandum, exists in the Vatican archives. He added that the memorandum is unsigned, typewritten in French instead of the Vatican’s customary Italian, and not produced on Vatican stationery.

Two Italian scholars, Matteo Luigi Napolitano and Andrea Tornielli, did some detective work and discovered the memorandum is genuine. Melloni’s reporting, however, was misleading. The document did not come from the Vatican as reported, but from the archives of the French Catholic Church — Melloni omitted this fact. The memorandum was actually written by someone who worked under Roncalli in the apostolic nunciature in Paris and was circulated to the French Catholic hierarchy.

According to Tornielli and Napolitano, the memo was drafted in response to an official dispatch dated Sept. 28, 1946, that Monsignor Domenico Tardini, the Vatican’s Secretary of the Congregation of Extraordinary Ecclesiastical Affairs, sent to Roncalli. (When Roncalli was elected pope in 1958, he appointed Tardini the Vatican Secretary of State.)

An English translation of the complete text of Tardini’s letter was published by John Allen in his column for the National Catholic Reporter in mid-January. A comparison of the two texts shows notable differences in tone, language, and content. Tardini does state that Jewish orphans who lacked means of support and were being cared for by the Church should not be returned to parties that had no legal right to them. Here, he was referring to Jewish relief organizations that would take custody of the orphans and resettle them in what was still Palestine. Nowhere in his letter does Tardini write that Catholic institutions should withhold baptized Jewish children from their surviving relatives. After explaining the Vatican’s guidelines, Tardini affirms, “It would be something else if the children were requested by their relatives.”

For reasons that remain unclear, the individual who wrote the memorandum went far beyond what the Vatican had specified. The allegation that Pope Pius XII orchestrated the “kidnapping” of Jewish children is false.

These facts do not mollify Vatican detractors. Since Rolf Hochhuth turned Pius XII into a villain with his 1964 play, “The Deputy,” the Vatican finds itself on the defensive in all matters concerning Pius. By contrast, charges leveled by critics are not submitted to similar scrutiny.

But Pius detractors are facing an uphill task. In February 2003, the Vatican began the process of opening its archives from 1933-1945. In his book, “Hitler, la Santa Sede e gli Ebrei” (“Hitler, the Holy See, and the Jews”), Jesuit priest Giovanni Sale writes that many of the documents that have been gradually emerging from the archives establish the Vatican’s opposition to both Nazism and anti-Semitism. If evidence that establishes Pius XII’s guilt isn’t found, perhaps critics will turn to alleging that the Vatican destroyed incriminating documents against the pope and fabricated all the ones that exonerate him.

About the Author: Dimitri Cavalli

Nicknamed "The Pale Horse," Dimitri Cavalli was born in the Bronx, New York in 1972. His parents are Italian immigrants who grew up in the same village about 120 miles from Genoa. Dimitri grew up speaking Italian. In 1995, he graduated from Fordham University in the Bronx with a double major in political science and history. In 1997, he received his Master's Degree in politics from the Catholic University of America in Washington, D.C. He has been writing professionally since 1997. His freelance work has appeared in Inside the Vatican, New Oxford Review, Modern Age, Crisis, Touchstone, Catholic New York, New York Sportscene, the Journal-News newspaper in White Plains, New York, the Palm Beach Post in Florida, and the American Spectator Web site. He is planning to write books on Pope Pius XII and Joe McCarthy, the late manager of the New York Yankees.