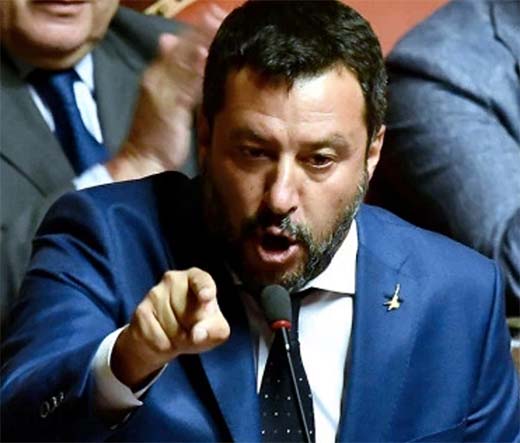 For Matteo Salvini, now former interior minister, things are not as rosy as they were in the spring.
E

arly into what would become a lengthy Italian stay, I’d go to the Olympic Stadium with my journalist friend Mario every Sunday afternoon to watch matches played by AS Roma, the more popular of the city’s two top-tier soccer teams.

At the time, mediocre Roma had an enthusiastic left-back named Francesco Rocca who seemed genetically inclined to take the offensive initiative and speed up the left flank as if determined to push the ball into the net all on his own. Almost invariably, he’d run out of steam three-quarters of the way there, losing himself, and often the ball, in human traffic. “Fa sempre il passo più lungo della gamba”, sighed Mario, a Fiorentina fan at heart. Semantically pared down that means, “He always oversteps himself.”

But this never bothered Rocca, who, whatever came, would continue churning until the final whistle blew. As entertaining as this was to watch it rarely changed the outcome of the game.

The remark about overstepping comes to mind apropos of Matteo Salvini, the outspoken head of the Northern League who until a month ago seemed headed for a political championship.

Salvini’s slay-the-immigrants bluster and vocal dislike of the European Union’s shortcomings (in part justified) made him, as interior minister, the most showman-like figure in government, by far outstripping his election-winning coalition partners, the still-evolving Five-Star Movement (M5S). Once a Sherman’s March of a party, M5S has lately come to recognize that Italy, like the Catholic Church, resists sudden changes.

As late as May, polls suggested that if Italians were called to vote ahead of schedule, Salvini’s Northern League (now popular in the south) would top the electoral tables.

Unwilling to wait, Salvini decided on a Rocca-like surge.

In hectoring his partners and torridly bashing their chosen prime minister, the mild-mannered lawyer Giuseppe Conte, Salvini increasingly bullied the M5S into the background, creating an untenable status quo for a party that had won nearly 33 percent of the 2017 national vote.

The PD, always sensitive to social welfare issues, had in fact been the M5S’s first choice as coalition partner two years ago. However, deep animosity between then-PD leader and former Prime Minister Matteo Renzi — many of whose disillusioned supporters had defected to the “kill-the-king” M5S — blocked any deal.

The M5S and the precariously patched-up PD can now work (albeit precariously) to revive their fortunes, a task made impossible in Salvini’s long shadow.

When Salvini, now passionately atop a cresting wave, refused to curb his advances, the parliamentary pitch turned ugly. And the government fell.

The M5S and post-Renzi PD then joined forces. All at once, Salvini lost his bully pulpit (the interior ministry job), and for now will have to snipe from the sidelines. If the M5S-PD alliance holds, Salvini may remember 2019 as the year he blew his chance.

That chance was predicated on making the government into an instrument of his outrage, which worked until the new-to-government M5S felt itself shoved from center stage.

Until Conte, tired of his lackey status, angrily called down Salvini and resigned his post, setting in motion the M5S’s left turn.

With no Renzi in the way, the M5S ended any prospect of early national elections by changing dance partners (if the alliance holds, any national vote won’t come for at least four years).

Salvini had indeed made a Rocca-like dash, but in the wrong direction. The congenital xenophobe who’d reveled in blaming Italy’s woes on bad foreign seed and EU meanies ended up scoring an own-goal.

It was astounding to behold a politician of Salvini’s ilk brought low in this way. Here was a man who had just spent 15 months dashing to migrant-entry hot spots while issuing Donald Trump-like warnings, his beard and barrel-chest soon a TV staple. Liked or loathed, he was the unlikeliest of bellwethers, and, some said, the “illiberal” heir to Italy’s muddled political penthouse.

Now, both the less novel M5S and the patched-up PD can work to revive fortunes unable to escape Salvini’s suffocating shadow.

“I’ll be back,” murmured “Terminator” Arnie in his robot villain day. And he made good on the Hollywood pledge. Flesh and blood Salvini may well do the same, but he’ll have to eat humble pie if he ever hopes to score big. He might even need to learn to pass the ball, a trait the larger-than-life strenuously object to by nature.

For Italy’s sake, it’d be best if he never came around to doing either.