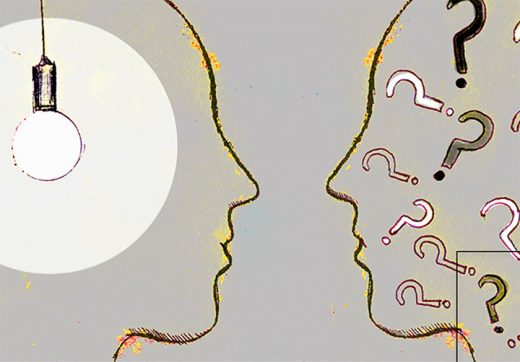 Why insult such an easy target?
D

I’m a rhetorical question, and I’ve hit upon a bit of a crisis. Why do I exist? If you don’t know me, this might seem like a pretty dramatic descent into doubt, but after all these centuries of having stuck around (I’ve never said “no” to anyone), I’m beginning to doubt my very makeup.

No dramatic moment triggered my predicament. I wish I could lie and invent one. That would certainly make things easier on everyone. I could tell you, “Yesterday marked the 100th billion time I’ve been used, and I’m mad as hell, and tired!”

The reality is that the doubt emerged without fanfare one Thursday afternoon. Someone was watching an inane TV show when a trite character made an off-color remark to his lover-of-the-moment. The lover started to reply with what would have been something vulgar. But the original speaker interrupted with: “Don’t answer that, it’s a rhetorical question.”

Simple, yes, but also hurtful. I can’t say why this particular snippet set me off. The truth is, I’ve heard that line uttered, with a few variations, for as long as I’ve been on earth. I believe I once even heard Charlemagne mutter it to the pope during his coronation, but I can’t quite recall the context. The passage of thousands of years can take their toll.

How would you feel if, time after time, someone invalidated your worth by saying you were just rhetorical?

It might not seem to you a particularly malicious phrase, but please consider this: how would you feel if, time after time, someone, a stranger, invalidated your worth by saying you needn’t be involved or dealt with because, well, you’re just rhetorical. Wouldn’t you feel unsettled to be muted all the time? And what if you then found out the reason you were muted had to do with your very character, making you, the otherwise stalwart rhetorical question, into an offshoot of someone’s cowardice? That, to me, is prejudice. Exactly the kind of prejudice that stops you from speaking your mind with candor and truthfulness. I belong to the worthy genus “question,” so why not treat me respect I deserve?

If a “Yes” or “No” question didn’t want me to attend their aperitif soirée because I tend to overeat the canapés, leaving few for the other guests, I’d understand. But if they were denying me an invitation simply because I’m by nature rhetorical on all matters, at times straying from the intended question, well, that is insulting. It means I’m being excluded because of who I am and how I manifest myself in the verbal universe. Not fair at all.

Perhaps I wouldn’t be so irked by the “it’s just a rhetorical question” expression if I were held in higher regard elsewhere. Instead, I’m largely monopolized by lame men on dates — which can grow really tedious. There, I’ve said it. I’ve grown quite tired of hearing men (almost always men) pose a question, and upon realizing they suddenly have no wish to hear the answer, their insecurities suddenly darting around like rabbits, that they feel compelled to dampen their dinner partner’s mood by hedging their bets, bringing on the intellectually horrifying phrase: “I asked it rhetorically, but sure, I guess that’s one way to look at the meaning of life…”

This inevitably said only seconds before the partner was about to embark on an intelligent response.

I am a series of words that should be uttered to make a point or to further conversation.

Ah, fragile masculinity, how you have tarnished my reputation!

The worst part, finally, is that after generations of people not taking me seriously, many have forgotten what I even stand for. I am not a silly question, nor am I a question intended to silence others into a sense of stupidity. I am a series of words that should be uttered to make a point or to further conversation in an intelligent and provocative way.

My, how I shudder to think how many times I’ve been misused because people didn’t want to even take the time to Google my actual purpose (before Google, most of them knew it by heart, except perhaps Charlemagne).

You can imagine how the combined effect of all these situations has led me to my breakdown. I have been mistreated, misrepresented, and misused, an upsetting combination. And while I hoped that this letter would lead me toward an understanding of myself, I’m afraid that in fact it has done quite the opposite. So I leave you with this final thought: if humans do not see me as I see myself, as a necessary and noble member (I have a crest) of the genus “question,” then who in the end is right? Who am I? And that, my sillies, is not a rhetorical question.