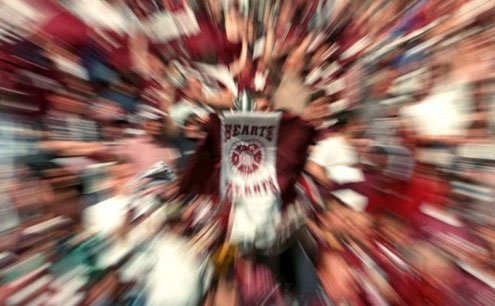 Scotland's Hearts, founded in 1874, is hoping fan ownership can pull the team from a rut.
L

ike it or loathe it, the relationship between money and the modern game is a kind of commercial slavery with few prospects for liberation — and a select group of football supporters across Europe finds nothing objectionable. Not when slavery means unrivaled success.

Manchester City fans, reveling in the newfound billions spent by its Abu Dhabi ownership, have been able to shed memories of yo-yoing between England’s top two (and even three) divisions. Chelsea, long in the hands of a Russian oligarch, no longer prides itself on last century’s UEFA Cup Winners’ Cup successes. Paris Saint-Germain, now virtually owned by the Gulf state of Qatar, still can’t believe it took 19 years to regain the Ligue 1 crown.

Supporters of these clubs are in no hurry to rid themselves of deep-pocketed owners.

Last May, I wrote about how fans of Portsmouth F.C. might have drawn up a blueprint for financially stricken clubs. The Pompey Supporters Trust’s successful takeover saw the English South Coast side become the largest British football club to be entirely owned by its supporters.

A year later there’s a distinct possibility another notable British club will join the list — Heart of Midlothian F.C., a.k.a. Hearts, the Scottish Premiership side that has been mired in administrative receivership since mid-2013. Foundation of Hearts, its main fan group, was cheered by a verbal agreement reached between administrators and UBIG, the club’s Lithuanian parent company, to buy out its 50 percent stake in the team.

This would finally put to bed the sorry saga of former owner Vladimir Romanov’s attachment to the club. The Russian-born Lithuanian businessman lost his shares in Hearts with the failure of Ukio Bankas and UBIG, the two financial institutions he used to leverage his purchase of the team in 2004. UBIG’s liquidators, UAB Bankroto Administrativo Paslaugos, have been handed the shares to manage.

While the verbal buyout agreement is a hopeful step, the accountancy company tasked with guiding Hearts out of financial misery has cautioned that even a written deal with UBIG would require the approval of a Lithuanian court. Only then would Hearts be able to leave administration with the fan group as the team’s new owners.

That hasn’t stopped fans from making financial pledges to Foundation of Hearts to help facilitate an eventual takeover. The supporters’ group’s website allows direct debit monthly payments of between £10 and £500 per month.

Just how much money has been raised so far isn’t clear, but Foundation chairman and Labour MP Ian Murray recently expressed encouraging words, noting “over 7,600 contributors and a 99 percent collection success rate.”

With reports suggesting UBIG’s asking price for its 50 percent stake could be as low as £50,000, the fan group may have the funds to pay long before the legal and bureaucratic technicalities are resolved. The question seems to be when, not if.

With luck, the matter will be closed ahead of the off-season, allowing Hearts to prepare for the next campaign over the summer. A 15 points deduction and a transfer embargo — both handed down at the start of the campaign as a result of the financial failure — has left the team rock bottom of Scotland’s top division and a miracle away from escaping relegation.

If the Foundation does take over, it will need to focus on immediately pulling the team out of administration, at the risk of incurring further penalties ahead of the 2014-15 season. It will also need to consider the kind of governance structure it wants to implement, how (and who) to elect as board members, and come up with a plan for its post-embargo transfer business.

Last year, the Pompey Supporters Trust had four months to organize itself ahead of the new season in England’s fourth division. Even so, the 2008 FA Cup winners are still flirting with relegation to the world of non-league football.

It’s a different story at Swansea City, where 20 percent of the club’s shares are owned by the Swansea City Supporters’ Trust, which has been hailed for its role in the success of the Welsh club over the last seven years.

It could be that fan ownership is most effective in small doses. What’s clear so far is that no matter how appealing fan involvement might sound, it hardly amounts to a magic wand. There have been no instant successes.

Instant success depends instead on complete subservience to football’s slavery system. For supporters of Hearts, only time will tell if liberation from that system feels better or worse.