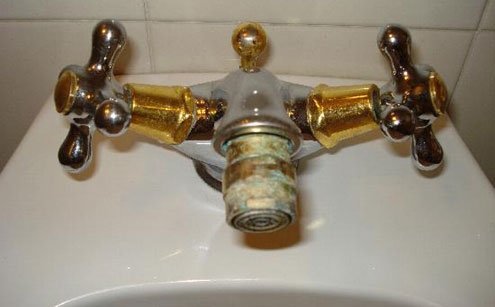 y plumber is demoralized, disinvogliato is the word he uses. Imagine water forced to flow in reverse and you get the lament’s symbolic gist. But my pipes are not the problem. Those he can repair, for only €100 in fact, a bargain when it comes to fixing anything in frequently-leaky Italy.

No, the hydraulic caprices of pipes and valves still amuse my plumber. It’s people he can do without. He won’t do jobs that run more than €2,000, he tells me. Why? I ask. “Because people don’t pay.”

He’s also stopped hiring helpers to fix things. Either he does a job alone or he turns it down. Once again the motive is money. “I don’t want to be responsible for disappointing those who might work with me.”

My plumber is a big and bright man, an early forty-something version of the American bartender who memorized your drink-of-choice the first time he poured it. He’s fit and able. I met him 15 years ago, long before this time of complaint. It’s hard to tell what’s changed, if anything, though 15 years of hard labor inevitably produces a layer of filmy glaucoma.

“Nowadays,” he tells me, “I just do my work, one small client at a time. I string together small jobs I can count on with people I know, mostly old customers.”

Italy has long been approximate with payment due. It was Latin laissez faire that helped fatten the ranks of unions, once swelled with legions of disaffected workers livid following decades of mistreatment by wrought-iron bosses.

But the middle class boom of the 1980s watered down unions. Some plumbers and mechanics got rich, or semi-rich, and put their tools away. Now they wanted people to work for them. The custodian in my building, who turns 50 this year, insists that his son not know anything about wrenches or repairs. “He should be able to ask others.”

The others, in Italy’s case (and it’s not alone), are mostly Romanians, Albanians, and Peruvians, big and small white men still willing and able to lend a hand, usually cheaply. The hard work goes mostly to them. At the same time, the indigenous population is uneasy about their proliferation. It’s a story as old as immigration itself.

My plumber resents cheap foreign labor. “It’s not because I’m a racist or hate foreigners. The work just isn’t as good. Take a leaky faucet: You can fix it by patching up the pipe or tell a client the truth, namely that everything needs changing. Given the choice, they’ll just fix the leak.”

The problem, he insist, isn’t with the foreign quick-fixers, who do what they’re told and pocket the cash, but with opportunistic Italians, content to repeatedly make cheaper superficial repairs while pretending plumbing cancers don’t exist. A culture of quick-fixes, he insists, means that more is broken most of the time. “I can blame the foreigners, but it’s the Italians who don’t care; who don’t make demands; who no longer even know the meaning of a professional job.”

What most irks my plumber is that Italian state, allegedly a standard-setter for the private sector, also embraces quick-fix labor. “You see major contractors paid with state money using cheap labor to cut corners. Everyone knows it and no one cares.”

Making anyone accountable to their promises becomes moot. My plumber tells me about a neighborhood client whose kitchen plumbing he redid in 2008. She promised to repay him in installments. “Whenever I call he she tells me, ‘Oh, yes, of course, you’re right, I forgot…’ I forgot? What’s the meaning of work if a client ‘forgets’ to pay? Think about how it sounds to me, to hear someone say they forgot?”

The larger dilemma, of course, is that much of Italy tends to forget. Only whim is professional. Stood on end and left to collapse, the country’s outstanding balances would provoke ripple-effect crisis, sub-prime style, if Italians weren’t so inured to the possibility of shortfalls. Instead, they scramble to invent stopgap solutions, an ingenuity North America still tolerates with difficulty.

But slack due dates make artful dodging the norm, angering Italy’s remaining blue collar work force and contributing to resentment toward the immigrant laborers who are willing and able to work under pre-union circumstances. Without recourse, these workers hope to overcome the late or no-pay cycle through volume. While my plumber fathoms the strategy, he feels no need to like it.

“For the love of God, anyone can do whatever they want. This is Italy. Cheap quality work and lack of professionalism seem to be what the country takes for granted. It thinks it’s being shrewd. Which is fine, so long as a client who opted for a quick-fix doesn’t call me at two in the morning when their house floods. I’m not picking up the phone.”