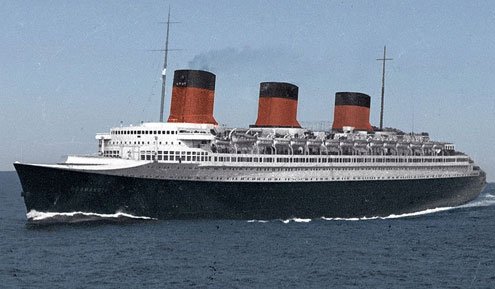 cean liners and not girls were the pinups of my youth. When dinosaurs shrank, big ships replaced them. Familiarity helped. My mother feared flying. Off we went to Genoa, Naples, Le Havre, Southampton. Down to the sea in ships, devoured by first class.

There was the “SS Liberté” (my 1957 maiden voyage, Le Havre-to-New York), “Leonardo da Vinci,” “Cristoforo Colombo,” “France,” fistfuls of big boats only a good God would supply in such abundance to a small boy. In the morning, a hand swished the day’s program under the cabin door. Dinner was served at a 7 p.m. (first sitting; no toddlers allowed) and again at 8:30 (adults with properly-attired, vetted children ages eight and up). Reservations a must.

As my appetizer, I bolted to the elevators, pulling levers with my accomplished accomplice, a bellhop-dressed attendant. We traveled deck-to-deck for decades of miles.

Liners of the period reflected class society. But the finery that delighted my mother bored me. I fell instead for the huge sleekness of the ships, their smokestacks graded for speed. For years, the fastest Atlantic liner got the Blue Riband, and with it celebrity status.

Until 1960 (enter the jet), hardly a writer, actor, tyrant, con man or diva missed the boat. They couldn’t. “The Only Way to Cross” was the title of a book about the Atlantic run.

The ships had the character of blondes and brunettes, of Cary Grant and Marlene Dietrich. Ships from France, England, Italy, Germany, Holland (the United States barely weighed in); ships nourished by nationalism and later transformed by war — the “Liberté,” for example, was originally North German Lloyd’s “SS Europa,” ceded to France in 1946 as part of postwar reparations.

Thrillingly lovely as the Atlantic liners were — the French Line’s “SS Normandie” is history’s most beautiful mega-ship — they also had North Atlantic toughness. An ocean of winter malice, the Atlantic could push waves to upper deck height, five-stories up. In 1967, two rogue waves sliced the bridge wings from the Italian Line’s “Michelangelo,” 45,000 tons. A middling iceberg tore the guts out of the handsome but unwisely designed “Titanic.”

Between 1910 and 1965, any visit to Manhattan begged a stroll along the West Side docks, where the seagoing edifices sat in repose. In 1966, when Manhattan blacked out, liner generators lit up the city’s west side.

Sturdiness, elegance and speed: These were the triple requisites. The American 20th century had its skyscrapers, Europe its liners, a rivalry between totemic emblems. The Deco “Normandie” was a floating Chrysler Building (brochures placed them side-by-side, the building only 15 feet taller).

The epoch that lorded over the ships was ambitious and overwrought. Within a few decades of World War II, my pinups were gradually retired, scrapped, or destroyed (the “Normandie,” trapped in New York harbor when France was invaded, burned to a hulk in 1942).

Sea travel’s only vestige is a tooling hobby, the cruise ship. Floating theme parks dawdle in and out of tropical ports in Florida, Bermuda, the Bahamas, Italy, Greece. Most of crusing’s vessels are obese, tall but squat, oceangoing fries unsuited to the hardships of northern latitudes. Even their names are clichés: “Enchantment,” “Serenade,” “Jewel,” “Rhapsody.”

The latest is also the largest, the Finnish-built “Oasis of the Seas.” At 230,000 tons, “Oasis” weighs three times more than “Normandie,” though it’s not much longer. It can fit 6,000, has parks, malls, atriums, movie theaters, surf-simulators, gaming rooms, a health spa, and a fitness center tailored for teens. The Love Boat-cum-Disney World will ply the banal Fort Lauderdale-Caribbean route, casual repetition to generate the big bucks. More and bigger cookie-cutter copycats are promised (“Oasis'” sister ship “Allure” is coming soon.)

The ship got a debutante ball that even “Time Magazine” felt compelled to note. “Last week,” it wrote in June 1935, “the President of France and some 2,000 other bigwigs of Paris journeyed to Havre in special trains. There they boarded the S.S. Normandie, seated themselves in the huge dining salon for a monster party which lasted all night, included entertainment by 170 stage-folk. This week the Normandie makes her maiden voyage to the U.S.” Later, Hemingway, Dietrich, Astaire, Noel Coward, Irving Berlin, Walt Disney would also ride France’s ocean-going Chrysler Building; suits and ties for dinner, please.

My “SS Liberté,” in turn, got a bit part in “Sabrina,” with Bogart and Audrey Hepburn flirting, Billy Wilder behind the camera. That was 1954, three years before my own Le Havre adventure.

“If all the world’s a stage,” begins the new “Oasis’s” promotional brochure, “our imagination and our innovation has no boundaries.”