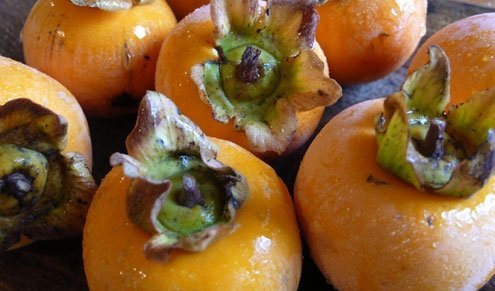 A persimmon morning call (sparrows on the side). Photo by Letizia Mattiacci.
I

once drove into the Sahara in a small rental car. At the time I didn’t think you could actually deal with desert roads behind the wheel of a Peugeot 105. I was sure you needed either a supercool Jeep or a camel.

It was a gloriously sunny time in May, more than a decade ago. We — namely a younger version of myself, and my better half — were visiting Morocco, having escaped Switzerland’s gray weather to dare the atlas’s twisty roads (on a budget, as always).

Unfortunately, our trip coincided with the visit of the wife of a prominent head of state, who, accompanied by her daughter, seemed to be bringing the country’s highway and rail system to a standstill. If she was out and about, tourists and commoners had their roads closed for the day.

One day all trains between Casablanca and Marrakech were cancelled. Apparently the king had decided to pick her up on the royal trail — maybe his limo fleet was in the shop.

Weary of roadblocks, we headed for the luminary-less desert.

Driving from Merzouga, a small town some 600 kilometers east of Marrakech, to the Sahara dunes can stun the senses. You spend an interminable time plowing ahead through expanses of stone and flat sand with literally nothing around you. That’s when you start thinking twice about the sturdiness of your low-budget rental.

Suddenly, though, like a mirage, the flat expanse yields to the soft, magnificent dunes of the Erg, known as the sand sea or the dune sea. But these dunes defy the romantic conventions of sandy yellowness. This is a Sahara of golden pink.

But the wonder of the dunes was soon replaced by something less wondrous. We couldn’t find a room for the night. Though the edge of the Erg is dotted with small guesthouses, all of which seemed empty, it was late enough that no one wanted to put us up.

We went on and on. Eventually, we saw two camels in front of a guesthouse built like a cube of sand. Two caftan-clad men agreed to give us a room. They also cooked us a meal and sang Berber songs. The next morning we enjoyed a lovely breakfast of freshly baked bread slathered with homemade jam.

I sat in their open living room as tiny sparrows flew in and out picking at the breakfast crumbs. I stared at the golden pinkness of the dessert and thought to myself, “I am seeing the Sahara from my breakfast table.”

The dream wasn’t over. On our way back over the flatlands we saw a truck oddly watering down the desert road. A few minutes later came Mrs. President and her daughter in a giant Jeep driven by a Tuareg man wearing a blue turban.

We in the Peugeot; they in the Jeep: everything in its right place. They even smiled at us, apparently surprised to see humans who weren’t part of their escort. Their security detail (yes, men in black) had positioned themselves a bit ahead and behind to give the visitors the sense they were tourists on their own. It suddenly became obvious why we’d had such a hard time finding a room and why the desert road was suddenly being “undusted”: Mrs. President had also been headed into the hinterlands.

Thankfully, we weren’t pulled over, and by the time we got back (thank you, Peugeot), it seemed like we’d lived through a 24-hour-long mirage.

What wasn’t a mirage was the breakfast, which you, too, can have, minus the Sahara.

Note on pectin: Pectin products vary. Use your favorite according to package instructions. You can also make the jam without pectin, by boiling it slowly until thick. But add the spices and orange juice at the end to preserve flavor.

— Using a soupspoon, scrape out the membranes and discard. Cut the peels into thin strips.

— Clean, peel and chop the persimmons. Make sure to peel them completely — once cooked, the peel turns hard as leather.

Serve with fresh bread. Add magnificent view. Or dream one up.