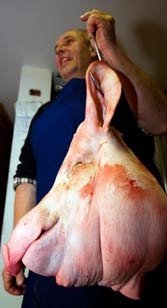 hen I got an invitation to go to Tarsillo’s house in Cassola, near Bassano del Grappa, Veneto to make salumi, I jumped at the chance. Salumi is the generic word for foodstuffs plumbed from a pig and its casings. I love salami but I always I wondered what was in it and how it was produced. This was my chance at finding out.

When I got to Cassolo the pig was already quartered and sans head, lying on a big wooden cutting board as Gigio (Luigi) worked quickly to cut up the pink beast. I touched the skin.

Morbid curiosity got the better of me and I asked just when our friend met his maker. “This morning,” Gigio replied. “It’s important to cut it up very quickly. The meat is very perishable.”

In just over an hour this little piggy — actually quite a big pig, all 200 kilos of it — had yielded dozens of pieces of meat, ready for the grinder.

Out spewed the meat and out squirted the fat, making rude little spurting sounds. The ground meat quickly grew into mountain of flesh on the cutting table — a homemade wood contraption with raised sides.

Four of us, eight hands, all pushed to amalgamate the mixture. Then came salt, pepper and a liberal sprinkling of Nardini grappa. Mario took a bit of the meat in hand and tasted it. I followed. It tasted similar to steak tartare.

But then it hit me: This is pork!

What about all those religious and scientific things we’re taught about the dangers of raw pork? The fact that I’m still here writing has assuaged most of my doubts.

Next came the casings; they’re extremely long and are turned inside out with great care. Even though they’re meticulously cleaned, the internal parts of the intestine are considered the “dirty” part and must be turned to face out. The casings are then pushed down to the base of a steel nozzle that looks just like a … oh, never mind.

In all, the process it took just over five hours, with four men (and me, slowing them down). The salumi was then transferred to the cellar for an ageing process that takes from two months to up to a year.

Tradition has it that everyone involved in salumi making is invited to dinner after the work is done. The same tradition dictates that pork is never eaten, not out of respect for the pig (as I had thought) but in deference to the salumi butchers. After all, these men eat pork nearly every day of their lives.

Afra, Tarsillo’s wife scurried up and down from the kitchen to the tavern — the large room in the basement for informal meals like this — and returned downstairs with a feast, including tortellini in broth, boiled tongue, boiled chicken, assorted greens, vegetables, salad from their garden, cheese and pickled vegetables.

I left this experience surprised at my reaction. Instead of making me cringe at any future thought of pork, I learned to respect the pig. Here was a truly efficient creature that work to eliminated our tendency to waste. We in turn returned the respect by not wasting a single part.

A terribly hard job was made fun by working as a team. Looking ahead to future generations, I ask Tarsillo’s son Paolo, who is learning English idioms: “Do you think you’ll ever stop making salami?”

About the Author: Sharla Ault