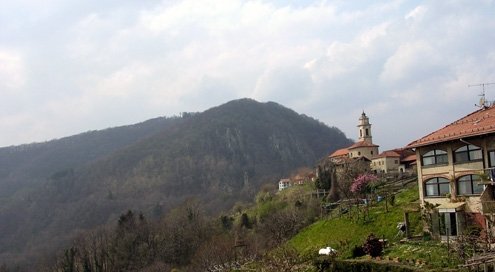 A look at Colma. Photos by Marino Sassatelli.
T

he town of Grignasco sits on volcanic rock older than the Alps on the diluvial plain of the Sesia River. It is located at the beginning of the Valsesia Valley, southwest of Lago Maggiore in Piemonte. Solitary Monte Fenera rises like a mighty bubble behind the small town.

A March wind makes us zip up our jackets as we walk from the train station into the center. Luckily, a group of women are making tortelli fritti in the main square this Sunday morning for a candidate in the upcoming election. The fried dough reminds me of Candian Timbits — doughnut balls — and their warmth pulls the chill from the early morning. After the rococo church, we follow the signs past the ancient church of San Graziano. Here the lane becomes a footpath with banks covered in yellow primroses, spring anemones and wood violets.

We climb the west slope. The trail is marked with numbered park signs and with the red and white painted stripes of the Club Alpino Italiano (CAI). We look down on the rooftops of Grignasco and see the wide shallow river winding on its route towards Vercelli. Ferns push up out of the ground in shady woods of predominantly oak. They look just like fiddleheads, edible curled fern fronds that I remember picking as a child in Nova Scotia in early spring.

After 15 minutes, we descend into the torrential valley of Magiaga and cross a stone bridge to the Grotte of Ara. We follow our guide crisscrossing the stream through the gully to explore the remains of caverns formed by the swirls of once raging ice age rivers, eroded on top by centuries of rain. The dark rock crumbles easily and reveals white calcareous stone underneath the exposed exterior. There is something familiar in the filtered light and soft forest floor.

Monte Fenera is considered among the most important prehistoric sites in northern Italy. Traces of Neanderthal man, the remains of cave bears and a jaw of the rhinoceros of Merk have been found. Today these relics can be seen in the Museo di Paleontologia e Paletnologia in Borgosesia, a larger town six kilometers north of Grignasco. The important grotte are closed to the public but some can be explored by appointment, accompanied by speleologists.

We turn back up the path to the hamlet of Ara. We follow a trail to the right which becomes steeper. It looks like the hooves of a hundred deer have run rampant through the terrain, rooted through the underbrush and upturned the soil into a bubbly froth. As we climb, we see chestnut and alder trees among the oak. The white rocks of the Sesia river and the rolling hills on the other side of the valley keep reappearing on the left. Again it reminds me of something familiar.

We reach San Quirico where stone ruins sit before a sheer rock cliff. Some of the group sharpen their knives on the dark whet stone. We follow the guide to find the Antica Strada dei Buoi, an old oxen road wide enough for forest ranger vehicles. It is less steep now.

Finally, we reach the top, Punto Basile, at 899 metres. The ascent has taken about four hours. A high cross built in 1909 marks the crest and its base provides protection in bad weather. There are picnic tables and maps of the mountain tops in view. In the distance is Monte Rosa. Below is Borgosesia and a number of villages dot the hills. After lunch we descend on the road to a path through more woods marked by giant chestnut trees.

We reach the village of Colma. Residents are congregating in the square for a meeting. What is to be done about their crumbling church steeple? While the group drink local spumante outside the bar across from the church, my husband points out two birds soaring over the valley.

“Doubt it. Peregrine falcons?” They glide and circle over the treed valley below.

“Poiane,” an elderly man says. Buzzards. I like the Italian name better.

“Any black storks about?” Marino asks.

They began nesting in Italy in 1994 and their data are collected in the park of Monte Fenera.

From Colma, we follow the signs for Località Cerianelli and Paradiso. The road becomes a lane and then a path. I hear a long drumming of a woodpecker, a sign of spring. We are now heading back in a ring towards Grignasco. We descend into a valley and follow along a shady stream. I have that familiar feeling again.

“Dragon backs,” I say to Marino.

“The rolling hills. We call them dragon backs in northern Ontario. Ice Age stuff. These valleys with right angled flow of the rivers and streams were formed by receding glaciers.”

But this forest is deciduous, not pines and spruce. All the ferns remind me of the east coast of North America.”

We didn’t sight a rare black stork. But on the train back to Novara in the late afternoon, we count five herons in a rice field, oblivious to the farmer’s spring preparations.