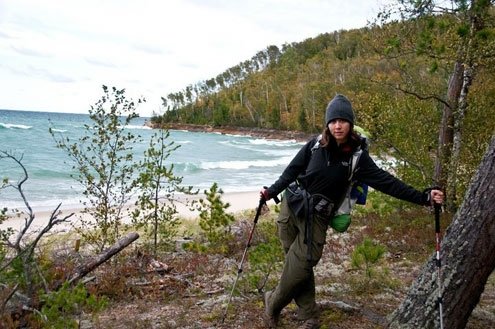 hen Fyodor Dostoevsky was sent to a labor camp in Siberia as punishment for joining a group of liberal intellectuals, he came out of the experience spiritually enlightened. He saw in suffering the one solution to modern ennui.

This autumn, when it was my turn to design a trip for the American division of my “adventure team” (two of my uncles and me), I decided on the 70-kilometer trek along the Lake Superior shoreline trail at Pictured Rock in Michigan’s U.P.

The U.P. or Upper Peninsula was traded to Michigan in return for the section of what is now Ohio that included Toledo. It was a fortunate trade for Michiganders as the land proved to be packed full of natural resources, yielding such economic boons as the Michigan Copper Rush of 1843.

Pictured Rock National Park was named for its 19 kilometers of Technicolor sandstone cliffs and rock formations just east of the town of Munising. The sandstone is striated in red and tan layers. Seeping out of the rock, along with water, are the pink-greens, reds, black-whites, and yellows of copper, iron, manganese, and limonite. While the resources are valueless now, they still put on a priceless show.

My cousin Ian, Uncle Tom, and I packed our food, tent, sleeping bags, and bourbon on our backs and began our hike. All three of us (in fact perhaps everyone in the western world) needed some time away from the grind. We were ready to relax our minds and exercise our legs, ready to breathe deeply of nature’s beauty, forget our cell phones, and exist simply for each moment.

In my mind the hike was going to be romantic, in reality it was grueling: thirteen miles a day of hiking up and down cliffs or along sandy beaches, carrying nine plus kilos of food and gear on our backs, getting to camp near sunset and still facing the chores of setting up the tent, drying out sleeping bags, filtering water, bathing in the frigid lake, making a fire. It was basically four days and three nights of, as my uncle put it, discomfort and deprivation. The exhaustion, however, created a mental state perfectly primed for sublimation.

Each outcropping allowed a view of Lake Superior’s turquoise waters racing straight to the horizon. Each day’s end meant the sun swallowed at a terrifying speed by that water and a clean slate imprudently speckled with stars. Each new morning was a journey across the nocturnal prints of deer, coyotes, and gulls — to me imbued with meaning. There we were on day three, walking 18 consecutive kilometers of glorious, pulverized seashell sand and there was not a human footprint in sight.

Italian novelist Alberto Moravia, a disciple of Dostoevsky, advised people to deepen their souls by stretching them to the limit of emotion. He said that beauty can best be found in suffering, that suffering can teach us to relate to our world and through it to better appreciate the quiet majesty that surrounds us. But his suffering seems to have become the modern agnostic hell. Westerners today are taught that only sinners and social misfits must suffer. To spend one night without a bed, without air-conditioning, mobile phone, or a hot shower, is tantamount to a being hung by the thumbs.

When many of my contemporaries insisted they could never do a four-day hike, they certainly weren’t referring to the physical side. Most are youthful and healthy and could certainly walk the distance. Many do an hour a day on a treadmill. No, they were talking about the dirt and primitive bathrooms (i.e. shoveled holes). Oh, and “What if it rained?!”

Many of these same contemporaries suffer from torpor of the soul, which they block out with alcohol and loud music on weekend nights, but which resurfaces each Monday morning. “Why does this insipid alienation haunt me?” they want to know. Like Dino in Moravia’s “La noia,” they’ve never fought or clawed for anything in their lives. They take the world for granted. Distracted, they’ve lost sight of the simple beauty of a sugar maple whose day-glo green leaves are lit on fire by the autumn chill.

On the last stretch of the hike, as we rounded the bluffs of an inland lake, I saw an army of molten iron leaves flanking the opposite shore. It was the culmination mystics seek in fasting. My mind knew everything and nothing and it was smiling.

Physicists say that the universe is elegantly simple, far more so than the workings of human society, which weighs the soul down with intricacies. The Dalai Lama says one can know the universe through meditating on a single atom.

For those whose idea of a vacation is a piña colada on the beach, maybe it’s time to rethink relaxation. Maybe a week spent with the modern demons of discomfort and deprivation can better drive out the trivialities that keep us awake at night.