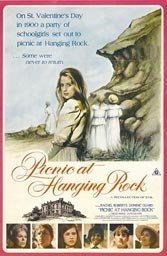 A memorable Don DeLillo short story character, a nun, sees those in rapture’s thrall as “singing of things outside known delirium.” The line has Peter Weir’s early and haunting film concealed in its inner lining. In 1900, a group of Australian girl’s private school students are ferried on a St. Valentine’s Day excursion to a craggy bluff called Hanging Rock, northwest of Melbourne. The lead chaperon for this “release” from post-puberty’s confines is mathematics teacher Greta McCraw (Vivean Gray). All is staid if deeply unsettling until the buggy driver Ben, once arrived at the rock in mid-afternoon, notices his watch still registers noon, as does Miss McCraw’s.

It’s Weir’s cue to take fraught and simmering estrogen to another level, which he does literally when three girls, Miranda, Marion and Irma, are allowed to explore the rock. At the summit, they lay down as if transformed by the sun, official traveling outside DeLillo’s known delirium. The girls are gone. Miss McCraw will look for them, but by the time the party arrives back at Appleyard College, the three girls and their teacher are officially missing.

Searches will be mounted by men on the periphery of Weir’s story, and Irma will turn up dazed and confused, but no one else. The school is undone. The local community is bewildered. What was innocent has turned ominous. The school’s headmistresses will later be found hanging at the base of the rock.

Specificity in the comings and goings of the characters matter less than the mood Weir creates, which distills girls gone wild energy into a tuning fork. The story’s point is mystery, and mystery’s character is stubbornly short on answers. What you don’t know can kill you, or make you disappear. Here is the new prim Western world of near 20th-century teens colliding with the ancient Australian hinterlands, timeless Aboriginal territory that in Weir’s canon decides who stays and who goes and then vanishes without a trace.