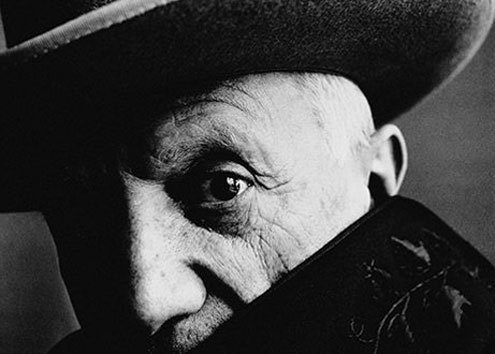 n February 19, 1917 the artist Pablo Picasso arrived in Rome for the first time. It was the beginning of a whirlwind, 10-week visit that would redefine his art and life forever.

At the time, the 35-year-old year old Picasso was living in Paris and badly in need of a break from the city. He was fresh from his second marriage proposal rejection in two years. His dearest friends, Guillaume Apollinaire and Georges Braque, were off defending the French front. Not to mention that Paris was in a bleak state. (As a Spanish citizen, Picasso was not obligated to fight for France).

Even Picasso’s Cubism, the artistic movement he co-founded with Braque, was under attack. Just 10 days before Picasso departed for Rome with the young French poet Jean Cocteau, the Dadaist manifesto 391 published an article by Max Goth questioning the “sincerity” of Picasso’s painting and branding him an “inevitable half-breed.”

The Rome trip could not have come at a better time.

It was a new gig and a new circle that lured Picasso to Rome. That January, Picasso and the great Russian impresario Sergei Diaghilev had put the finishing touches on a commission for Picasso to design the costumes and sets for “Parade,” a one act avant-garde ballet written by Cocteau, scored by Eric Satie and choreographed by Diaghilev’s lover Léonide Massine.

“Parade” was to be performed by Diaghilev’s famed Ballets Russes in Paris that May, and in the meantime Picasso and Cocteau joined Diaghilev and Massine in Rome where the Ballets Russes was headquartered during the war. When the composer Igor Stravinsky showed up, Picasso’s esteemed Roman circle was complete.

Diaghilev was a fine and spirited host. The evening they arrived, Diaghilev whisked Picasso and Cocteau off to admire the Coliseum by moonlight and showed off the Circus Maximus the next day. Diaghilev also organized excursions farther afield.

Picasso accompanied the Ballets Russes to Venice and Florence where he visited Michelangelo’s Medici Chapel and in March, Picasso, Diaghilev, Massine, Cocteau, and Stravinsky checked into the Hotel Vesuvio on the Naples waterfront. It was the group’s base from which they explored the ruins of Herculaneum and Pompeii, the latter’s famous brothel frescoes inspiring the sexually-charged Picasso to doodle a few of his own pornographic imaginings on site.

However, it was the Farnese marbles in the Museo Archeologico Nazionale in Naples that would have the most profound effect on Picasso’s art. Over the years the inspiration from these classical Greek and Roman masterpieces burned deep in Picasso’s sculpture. They also propelled him closer toward Neoclassicism in his painting, eventually serving to “classicize his work far more effectively than the antiquities he had studied in the Louvre,” as John Richardson notes in the epic third installment of his seminal Picasso biography “Picasso: The Triumphant Years.”

Back in Rome, Picasso continued meeting artists while making the requisite tourist stops. He got to know members of the Italian Futurist movement, including Giacoma Balla and Fortunato Depero, and visited the Vatican Museums with Enrico Prampolini who commented on the “pleasure with which [Picasso] contemplated the Sistine frescoes and, still more, Raphael’s Stanze and the Vatican museums of sculpture.”

From his room at the Grand Hotel de Russie on Via del Babuino, Picasso could see Villa Medici, the home of the French Academy, on the salubrious Pincio Hill. Corot, Velázquez and Ingres — among Picasso’s biggest influences — were closely associated with the 16th-century villa that Picasso diligently sketched and painted in vibrant, pointillist watercolors.

Just behind the de Russie, Picasso kept a studio at 53B Via Margutta, a hidden and picturesque little street still connected to the arts. Here, Picasso turned out a prodigious cornucopia of designs for “Parade,” some inspired by the Commedia dell’arte he had seen while in Naples.

In pencil and ink, he drew a whimsical stream of his companions in caricature and also found time to do several studies for his famous “L’Italienne,” a Cubist painting of a voluminous Italian woman gazing on a vermillion St. Peter’s Basilica in the distance. This painting and the tempera-on-wood “Arlequin” were both completed in Rome.

He also found a new sujet d’art: Olga Khokhlova. She was a 25-year-old Russian ballerina who had been accepted into the company following an excruciatingly difficult audition overseen by Diaghilev and Ballets Russes titans Vaslav Nijinsky and Enrico Cecchetti.

Picasso’s infatuation with the graceful, dark-haired Slavic beauty had developed during rehearsals for the Rome ballet “Les Femmes de Bonne Humeur.” His attendance at rehearsals and performances probably had more to do with his burgeoning love for Olga than it did with his desire to learn the ropes of theater for “Parade.”

The lovelorn Picasso was determined to marry, and in Olga he found his future bride — a choice everyone around Picasso found downright confounding. Olga was “nice, but nothing,” the prima ballerina Alexandra Danilova remarked. “We couldn’t discover what Picasso saw in her.”

Olga was certainly no bohemian, as Picasso’s previous lovers had been. In fact, Olga’s chief offense seems to be that she was as pure as the driven snow. Diaghilev adamantly opposed the union, arguing that a proper Russian girl would never let Picasso seduce her without the promise of marriage and that Olga’s parents would never approve of their daughter settling for a painter (her father was a Russian colonel).

Diaghilev even tried unsuccessfully to tempt Picasso by offering him another dancer who was touring in South America. While the virile Andalusian may have dealt with Olga’s chaste refusals to let him into her room at the Hotel Minerva by frequenting brothels and prostitutes, his lovingly-rendered Rome portraits of her suggest that she was his one and only muse. They married the following year on July 12th in Paris, 18 months after they first met.

By May, Picasso, Olga and the whole Ballets Russes crew were back in Paris where Parade opened at the Théâtre du Châtelet to disastrous reviews from critics and resentment from audiences disgusted by its frivolity during wartime food rationing, flu, death, and bombardment.

The rebuff didn’t stop Picasso from staying on with the Ballets Russes for eight years while the Italian influence endured. He continued to design costumes and sets inspired by Commedia dell’arte, with Stravinsky’s “Pulcinella” being the high-water mark.

Inspired by Italian classical art, Picasso’s painting would soon progress from a Cubist to a Neoclassical phase in which Greco-Roman drapery and volumetric, sculptural figures occupy an azure Mediterranean landscape.

Despite the birth of their son Paolo in 1921, the marriage between Olga and Picasso was weakened the artist’s ostentatious philandering. It dragged on miserably until Olga’s death in 1955. Fearing that divorce meant Olga would walk away with a vast portion of his wealth, the single most important and prolific artist of the 20th century simply decided that it was cheaper to keep her.