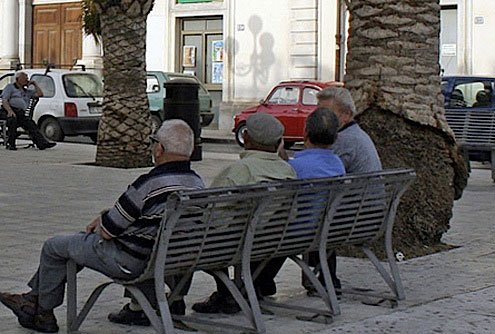 We live instead in the global, electronic piazza, where whispers graduate to conspiracy in a nanosecond.
A

mong the first Italian words I ever heard was influenzabile. It literally meant “easily influenced,” impressionable in English. But its Italian meaning implied conformity.

Someone who was influenzabile would accept, defend, and passionately advocate views they’d heard in passing. This despite marginal knowledge of the subject at hand.

Three decades ago, television had less impact on culture. Views, gleaned and embellished, came from friends and lovers, from cocktail party chatter. It was piazza banter bestowed urban credibility.

Unlike Anglo-Saxon culture, in which impressionable suggested the pejorative — promoting the views of others meant you had none of your own — the Latin world reveled in a gossipy soup of whispers generated from infinite hearsay.

Hearsay was fundamental to Italian culture: the easily-influenced broadcast their interpretation of the latest news until information approximated folklore. Plots were everywhere. The CIA and KGB ran everyday life. Elaborate conspiracies managed by Masons or communist determined the conduct of politics.

If you knew something, had a college degree, you were eligible to bark up the carnival.

This comes to mind in the aftermath of the pope’s unfortunate reference to a Byzantine emperor who had a low regard for Islam.

Examine the pope’s full text and you find a theologian’s dense tract on the relationship between reason and faith. It’s pure Ratzinger: science and rational thought, while admirable, can’t and should not supplant spiritual causality. Democracy that militantly excludes faith is not just.

In essence, the pope said he found no comfort in Islam, certainly not its violent side, nor much comfort in Western democratic life, whose values are material and anti-Christian.

A student of the papacy might have considered the speech a mere repetition of long-held tenets — which it was.

But we do not live in the global village, a fairly upscale place.

We live instead in the global, electronic piazza, where whispers graduate to conspiracy in a nanosecond.

Islamic militants have merely found a predatory place on the grid.

The medium is more than ever the message, with the pope’s mishap a case in point.

The moment Western media recognized the inflammatory passage, it was stuffed with ominous warning and flung to the other side of the piazza, which caught it on the fly and spat back poison.

Instantly, the spitting supplanted the remarks themselves and hijacked the story. Egged on by thrill-kill tones, the impressionable took it from there: Burn, baby, burn.

Should the pope have known better? Yes.

You don’t play chess with hysterics.

You can’t speak in highbrow to religious demagogues who indulge the amoral “democracy” of free speech to stir up street fighting men.

The poor and the busy are the planet’s most impressionable population as well as its majority. They accept generalization to minimize confusion. They’d prefer to belong to a response than to select one.

When Hugo Chavez waved around a Noam Chomsky book while bashing George W. Bush, he did Chomsky a favor: his sales global jumped: demagoguery, marketing, and commerce converge in a way unprecedented in human history.

That Islam’s minority rage-merchants would seize on the pope’s remarks to hawk their rage may be deplorable, but it’s also entirely normal on a loud planet that has come to depend on fantastic bouts of parry and thrust.

The global “piazza” is a reality project that feeds on windowsill howling to keep itself in business.

Regarding the papal pitfall, one curious irony stands out — and it helps explain the repeated apologies (loathed by those who insist all regret is weakness).

The Catholic Church admires aspects of Islam that science’s defeat of ritual has robbed it of.

“The image of believers in Allah who, without caring about time or place, fall to their knees and immerse themselves in prayer,” Pope John Paul II wrote in 1994. “remains a model for all those who invoke the true God.”

The new pope, an august 80-year-old German professor with classroom nostalgia, found himself apologizing to give the piazza a sound bite it could snack on to counteract his.

The old one, who kneeled in a Damascus mosque five years ago, and who knew how to influence, would have known better than to rig the piazza for a fight.