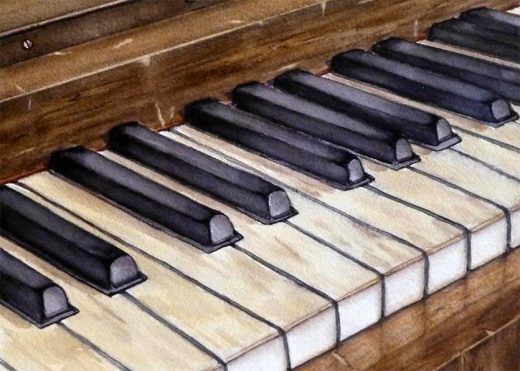 The author and her brother learned basic piano from Mrs. E, but what she taught went further.
I

learned to play piano from the woman we knew as Mrs. E. Her real name was Charlotte, and her married name was a long German word that started with E, so we just called her Mrs. E. She was a little turnip of a woman, with a bulb-like crown of wavy grey hair. She had a joyful aspect, and often said, “Bless your heart,” for no other reason than your simply being there.

She was also the first person I ever knew who was absent-minded, long before I even knew what that word meant. She wore a Bic pen behind her ear so she wouldn’t forget where it was, and when asked a question, she crossed her eyes in concentration, as if rifling through her mind’s pages for the answer.

She drove a blue Pinto that reminded me of a turtle, and she was always about 45 minutes late when she came to our house for lessons. Sometimes my brother Michael and I went instead to her home, usually on Saturday afternoons. She lived on a few acres outside of town, in a slate-blue farmhouse with a garden and compost corner out back, and a pony out front.

Boxelder bugs roamed the house like they owned it.

We’d arrive on time — which was just as Mrs. E, who was running behind, was sitting down to lunch with her husband Albert, whom she called “Daddy.” They had fried hamburgers with all the fixings, and my brother and I waited in the living room, listening to them crunching their pickles, trying not to laugh.

Mrs. E always went beyond the allotted time with Michael, her favorite. He definitely had the gift of music, and moreover, he played with his heart, a good thing. I played to be perfect, which was less good. Later on, long after sibling rivalries died down, I would metabolize the artistic moral of the story — do it with heart, or don’t do it at all.

Once during my lesson, she interrupted my playing. “Listen,” she said. “Do you hear it?” I thought she was talking about the notes, but she wasn’t. “The birds,” she said, mesmerized.

Mrs. E had other lessons for us, too, which seemed to have less to do with music and more to do with finding the music in life.

Once during my lesson, she interrupted my playing. “Listen,” she said. “Do you hear it?” I thought she was talking about the notes, but she wasn’t. “The birds,” she said, mesmerized, as if it was the first time she’d ever heard birds chirping. “Spring is coming!”

She hosted a summer camp called “Melody Ranch,” where in addition to music, we learned to make Mrs. E’s beloved recipes of won ton soup, hobo stew, turtle dove cookies, and my favorite, homemade ice cream, which we took turns churning by hand. We also put on a play written by Mrs. E and Albert. One year they play was called “This Week We’re Going to Get Organized,” a sweet introduction to irony.

Eventually, my parents had bigger musical ambitions for us, so they found another teacher. We were sad, but didn’t dispute the decision. We had warm, funny memories of Mrs. E, and we’d occasionally bump into her around town, with a Bic pen behind her ear.

Lately I’ve been thinking about Mrs. E’s legacy in my own life because I’m teaching Italian, a language that to me is like music. I certainly have a touch of her absent-mindedness: I’ve been known to dive into a lecture without the overhead lighting turned on, or ask my students, some of whom are trying not to laugh, to find the volume adjustor on the sound system.

But at the board, doing my word gymnastics, I still manage to transmit my wonder and joy for Italian, occasionally hooking them on lessons that have less to do with language than life. For example, when they learned the word prova, or test, I explained they would have both a written and oral prova as part of their final.

I then pointed out that there were other kinds of prove nella vita, or trials in life, of a more existential nature: illness, loss, breakups. I mentioned coming across a hand-written note written to me by an elder Italian woman (the mother of an Italian boyfriend) after the prova that was my mother’s death. “However much life gives us that is noble, beautiful and elevated,” she wrote, “it also gives us difficult trials….”

I paused to look up at my students, and every one of them was with me.