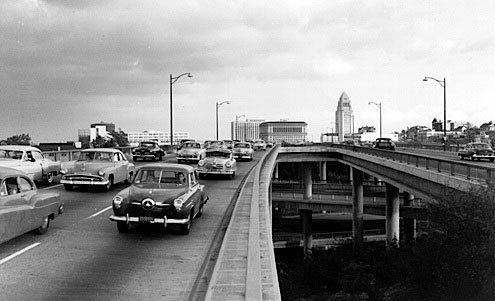 t wasn’t until I saw a limo get stuck at the entrance to a strip mall that I really felt I was back in Los Angeles. Its midsection was too long and low for the concrete camel-hump of the driveway, so there it lay like a beached white whale. When I noticed the driver was wearing a chauffeur hat and its inhabitant got out to try to free it, I made a confident guess that it was a rental. No one wealthy enough to have a driver would choose a limo or get out to push it.

I’ve been back in L.A. a month now after eight months in Italy and I’m finding it a little difficult to adjust. Even though the limo-beaching was the highlight of my day, it was one of several reminders that I’d left Italy in the rear-view mirror.

As soon as I got back my body expressed displeasure with dry desert eyes and skin, allergies and a bumpy rash. It wasn’t long before my mood changed. I was finding L.A. too large, lonely, abrupt, and garish; too much traffic with far-too-friendly and attentive waiters. It was forced. Life felt like a conveyor belt: Get on, get things done, and then get of the way. All I wanted was to get off.

Even on its best days the city encourages antisocial behavior. But in L.A. hibernation is my form of self-preservation. Needing a little distance to feel sane, I found myself in the protective bubble of my car or my house.

I didn’t need such distance in Italy. On the outside I seemed to possess very little: no job, no boyfriend, only a small group of friends; I was an outsider. But I never felt it. When I went out, even in the absence of friends, being around people defused the loneliness.

I miss the little things, such as speaking Italian. I miss walking to the pasticceria each morning for my brioche and cappuccino and hearing someone say “Dimmi” as I waited to be served. I miss being able to take the time to pick which tomatoes I wanted while being asked how I wanted to eat them — raw in a salad or cooked in soup; today for lunch or tomorrow for dinner.

And I’ve discovered they matter to me. I need them because I’ve become convinced that they are where satisfaction lies — not in the size of a meal, or what you own, or in the immediacy of the obtaining things. In L.A. details are at the bottom of the priority list. People just don’t have time for them.

Savoring and lingering is what the Italians do best. When a meal ends, a macchiato closes it out. I got used to that. It was my signal. Here, I’m stunned by the abrupt end of a meal. As soon as you finish, or sometimes even before, a fellow diner agitates for the check while the busboy clears the table.

In L.A., people always want something else or someone else; they want to be somewhere else with someone else. Always more, more, more, because having more is the American dream. And yet I feel like I have less of what’s important.

The problem, of course, comes in resisting the more. Few understand and fewer have time to listen. I don’t want to rush. I want to take my time. I want less, but I want to savor what I do have.

Though the American dream always made me uneasy, I believed it was something I should seek and desire. After all, it’s why my family moved to the United States from Australia, to make a better life.

Leave it to Italy finally teach you how to be comfortable in the not wanting. I can now relax without feeling guilty for seeking simpler vision of pleasure and personal happiness. I can put aside American convenience in favor of Italian contentment.

So, as I ease back into life in L.A. I remind myself to slow down. No more excuses for not pausing to enjoy. No more guilt — too often an American past-time — over making my own pace. As the Italians would say, “piano, piano” — even if my friends do have to wait five minutes for me to finish my macchiato.