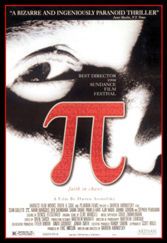 Stripped of its intellectual hardware (the molten core), this is a parable about the perils of thinking too much. Agoraphobic mathematician Maximillian Cohen (Sean Gullette, who co-wrote the story with director Darren Aronofsky) locks himself in his dingy New York City apartment to keep migraines at bay and order the universe using a supercomputer. If he can only get the numbers right, he can run anything and everything. Alas, Max is going mad.

Aronofsky employs grainy black and white as cinematic code for disabled reality. As Max gnaws at himself, his paranoia increases. Is a Jewish cabal monitoring his work? In a bizarre tangent, his only relief from delusion are games of Go with former professor Sol Robeson (Mark Margulis). And down we go into Aranofsky’s favorite place: the cluttered basement of the short-circuited mind. An alarming film and a worthy precursor to “Requiem for a Dream,” which also trawls the abyss.