Philanthropy by any other name 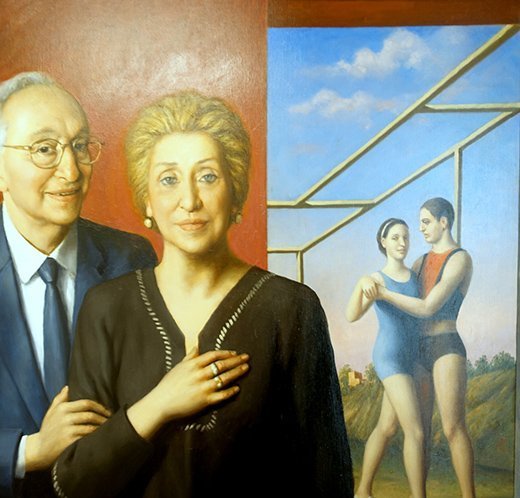 Stefano Di Stasio painted the Cerasis against the backdrop of one of their artworks.
I

n April, Rome cheered the opening of a new museum of 20th– and 21st-century Italian art. According to the Italian new agency ANSA, Palazzo Merulana gallery was immediately popular, with some 9,000 visitors in two months.

Construction mogul Claudio Cerasi and his wife Elena are the money and art behind Palazzo Merulana. Brothers Paul and Maurice Marciano, creators of the Guess Jeans brand, established the LA gallery. Both sets of founders are part of a trend — the creation of private galleries — some find disturbing. A 2016 survey tallied more than 300 private galleries globally, 70 percent of them established since 2000, and a fifth between 2011 and 2015.

These exciting new galleries are designed to show off their founders’ collections. The Cerasis began collecting 20th-century Italian art in the 1960s. They later bought works by artists such as metaphysicist Giorgio De Chirico and Futurist Giacomo Balla. The Marciano brothers began purchasing art in the 1990s and have more than 1,500 pieces focused, according to their mission statement, on “principal works by established, mid-career and emerging artists, living and working around the world.” Their trove includes works by photographer photographer Catherine Opie and contemporary Pop artist Takashi Murakami.

In each case, the principals selected a building in a major city – but outside the main art neighborhoods: the Cerasis opted for via Merulana in the city’s Esquilino quarter, while the Marcianos chose mid-Wilshire in Los Angeles.

Each also selected a building of some significance, but not by a well-known architect. Palazzo Merulana is a neo-classical former government ministry building that opened in 1929. The Marciano Art Foundation is a large white block built in the 1950s as a Scottish Rite Masonic Temple by reputable bank-building architect Millard Sheets. Each couple spent millions remodeling their respective buildings.

Both galleries fit the criteria often cited as rationales for private museums: show work that would not otherwise be shown, and offer it in an area that does not otherwise have easy access to art. In the process, they assist in the revitalization of a community.

Those are the positives.

There’s also another perspective, albeit hypothetical, to examine what’s happened. These projects cost lots of money, and lots of public money in the form of subsidies for buildings, tax deductions, tax exemptions, and other tax breaks for not-for-profit organizations the founders created. None of this is transparent, since these are neither public galleries nor public foundations. As with President Donald Trump’s tax returns, one is left guessing at the extent of the tax breaks. Would this money have been better spent donated to an already established public museum? The Cerasis, for example, could have donated to MAXXI, Rome’s national contemporary art museum, which has a woefully small permanent collection.

In this regard it’s interesting that Cerasi’s construction business was hired to build state-funded MAXXI, which opened in 2010.

The Marcianos in turn might have looked to the well-regarded Los Angeles County Museum of Art (LACMA), two miles away from their own museum on the same street.

Both galleries have more limited access than most public museums. Palazzo Merulana is closed weekday mornings, and the Marciano is free, but requires online reservations.

The Marciano brothers in front of a Cindy Sherman photo-mural.

One argument made by private founders is that public galleries don’t have the money or space to show all their works, leaving much to languish in storage. At many large public museums only five percent of collections are on view at any given time. Private museums are seen as providing sustenance for art where government funding is lacking or cultural authorities are inefficient.

Moreover, these founders want to have some say in the display of their work. “The old paradigm,” notes Kent Logan who, with his wife Vicki, has a private museum in Vail, Colorado, “is ‘Give us your money and we’ll do with it what we want,’ and I don’t think that’s operative anymore.” Michael Govan, director of LACMA since 2006, says something similar: “You’ll find a lot of people who don’t want to use the word ‘philanthropy’; they want to use a word like ‘investment.'”

Christine Howald, a professor of art history in Berlin, makes a comparison as well as a contrast between Renaissance Italy, with its private collections, and the new private museums.

Says Howald: “The access policies of most of the museums surveyed (55 percent of them are free of charge) … underline that private museums manifest the strong wish among today’s collectors to share their artworks with the public. This brings out one main difference between early modern accessible private art collections [such as Galleria Barberini and Galleria Pamphili in Rome] and today’s private museums: it is no longer the inquisitive visitor who asks for access, but the collector … who opens the doors to the collection.”

A case can be made that public art museums are also for the rich. The wealthy sit on their boards. Often their collections are on display. The line between public and private museums may in fact be blurring. Nonetheless, it’s time to rethink the government subsidies and tax incentives that underwrite, as one writer put it, “the museum of my stuff.”