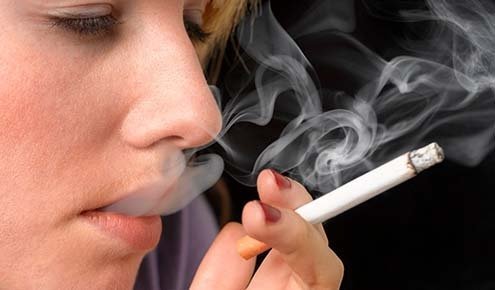 After a five-year break, a return to an old habit.
I

A part of me wants to blame Daniel. “Hey, let’s go out for a second so I can smoke,” he said after a Rome dinner. He’d just annihilated his final portion of sautéed chicory (it’s everywhere in Rome, so get used to it. It’s also very good.)

Once we got outside, Daniel tugged on his of Marlboro Silvers and lit up. It wasn’t the first time I’d been in close proximity to a smoker. It’s just that before I hadn’t been tempted. But this the devil perched himself on Daniel’s shoulder and whispered, “Want a drag?”

He didn’t have to say it twice. I got right back to into it and smoked until we both went back in.

It could have ended there, right?

But it didn’t. A couple of days later, again in the company of my Devil-enabler, I suddenly felt entirely uninterested in my health and wellbeing, Daniel was driving when I told him to stop the car near a tobacco shop. I went in and bought my first pack of cigarettes since I’d started four years of healthy living.

I’ll be honest. I’m sorry it ever happened and I think I’ll quit again soon, this time for good. But I also feel I should be honest and thank Marlboro & Co. for reminding me of a side of myself I’d forgotten about.

I realized that tonight.

The after-dinner cigarette is part of a true smoker’s ritual. What’s more satisfying than a cigarette after a good meal? It caps things off.

Since I started again, I go out on the terrace after dinner and light up. I’d been doing this for a couple of months before picking up on pattern that showed how much I’ve changed over the last decade.

Once upon a time, smoking meant staring up at the heavens (my aching neck will gladly attest to the damage done). Nowadays, I look straight ahead or just down.

If I wanted to play amateur shrink, I’d say my behavior is all about a slight sense of guilt. But that’s reductive reasoning.

Since I’m guessing all five of my regular readers want to help me get to the bottom of this, I’ll help out.

Question: What happens when you’re dreamy and star-stuck and feel convinced you’re a small cog in a vast and limitless universe that wants only to do right by you? Very likely you look up dumbstruck at the sprawl overhead. You want to take in every celestial shimmer. After all, everything’s blinking at you and for you. You’re in love.

What happens a few years later, when you’re so incredibly grounded you no longer have either the time or the inclination to look up and dream? In fact, you’re so grounded that you think you might actually have run out of dreams. You feel earthbound. The once-striking universe now belongs only to philosophers, astrophysicist and astrologers. End of story.

And if you do happen to tilt your gaze upward, the reaction is no longer poetic but a mix of awe and fear, so much so that you quickly go back to admiring the shrubbery on your balcony

Before I quit smoking, I thought of myself as a woman who couldn’t get enough of stargazing. Now that I’ve started again I see myself as someone less interested in the vastness of space and more interested in what’s happening in my own.

What’s the cosmic joke? Since that night when Daniel offered me the cigarette, he’s quit. Not only that, but he now sweetly encourages me to please the same, for no other reason than how smoking ages the skin (gay men can be annoyingly vain).

I’d still like to blame him for having offered me that after-dinner drag. But one of the advantages of being grounded is to accept personal responsibility for your own choices. They’re yours. No one dictates them.

To some extent, getting caught up in my old habit has helped liberate me.

Who knows if I’ll start looking skyward again with love after I stop, combing backward through old dreams. Life is all about phases, I know. Like the moon, which, after all, you need to look up to see.