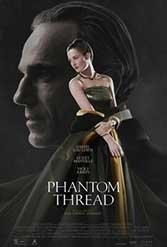 Paul Thomas Anderson is a jitterbug. In 2012 came “The Master,” a story about male authority, authoritarianism and cults, then “Inherent Vice,” a riff on Thomas Pynchon’s counterculture caper send-up. Now it’s “Phantom Thread,” a dapper musing about a 1950s English fashion designer who has his upscale society world under full control until he falls for an improbable interloper. Suddenly, rigor is ruffled and a power struggle is born.

The designer is Reynolds Woodcock (Daniel Day-Lewis), an elegant, witty, “incurable” bachelor who is as polite and class conscious as his postwar period. He ministers to all the details of his life and times, the literal antithesis of previous Anderson characters prone to spilling their guts. Reynolds spills nothing.

Until Alma (Luxemburg actress Vickey Krieps), who visits his country estate like a gift horse awaiting transformation from waitress into the next Audrey Hepburn (Shaw’s “Pygmalion” and Lerner and Lowe’s “My Fair Lady” courses through these veins). Reynolds, who can have anyone, is smitten with this one, and with the idea of stitching her into the sumptuous. Their tricky romance makes the film tick. But just what makes Reynolds tick is something else again. There’s an important “other woman” in all this, Cyril (Lesley Manville), Reynolds’ sister and business partner, who knows her brother’s neatly controlling temperament all too well.

The ongoing war of wills between adorer and his adored is nifty to watch, with Alma stirring the pot: “All your rules and your clothes and all this money and everything is a game!”

Lewis, who has said this is his last movie, stays the roaring he perfected in “There Will Be Blood,” playing snake charmer instead. Both as cock of the walk and as a man humbled, he’s in Jeremy Irons’ territory, which is to say masterful.

Alma will grow tired of playing mantle-piece muse and trigger the kind of reckoning on which Anderson thrives. But by then he’s already delivered the meat of his message (the perils of male self-involvement), making the film’s first-half magic hard to recharge.