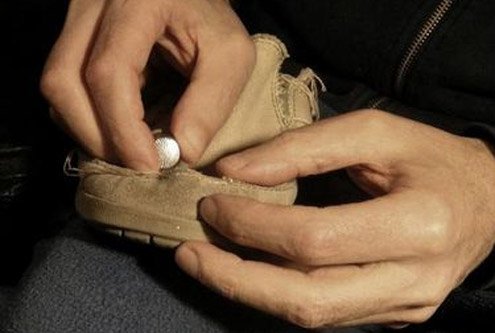 Clean and thoughtful hands that could have crushed anything but didn't.
I

t happened the first time on the subway. He stood in the next car over, and though his face was partially obscured by a pole, she was sure she recognized his hands.

He was clutching some sort of electronic pad. The skin pulled taught across the top of his right hand making small mountains of his knuckles. She remembered the first time she’d noticed his hands, the way they were at once strong and smooth. Clean and thoughtful hands that could have crushed anything but didn’t.

She craved his hands. She used to feel like she could fit inside of them, which (of course), he had reminded her was impossible.

She swore she saw him a few weeks later in the produce section of a health foods store. She knew that he preferred to eat organic, so why shouldn’t that be his forearm, buttermilk white and bespeckled in tiny moles bulging just below the crease of his elbow? He was vigilant about checking them. Melanoma was one of the most preventable cancers; it’s common sense to get them looked at. He never understood why more people didn’t.

He was squeezing grapefruits. Did he like grapefruit? She tried to remember.

She knew he liked oranges. One afternoon in her kitchen, when the autumn sun streamed in stripes across the table as she chopped fennel and black olives and oranges, he’d stolen slices and sucked the peels up against his front teeth. He smiled a big dopey orange smile and said something muffled through gritted teeth. She put a slice in her mouth too and grinned back at him. They carried on an animated conversation through their orange peel mouths and she wondered how long it took to become a ventriloquist and if this was one of the exercises.

When they said goodbye for good (for good!), she stood in the doorway and watched the backs of his shoulders disappear down her block.

After that she had started seeing him everywhere.

At the mere suggestion of him, her heart rate accelerated and the expression “fight or flight” finally made sense. She had once sprinted across the street and ducked into a pharmacy to avoid what looked like his profile in black Ray-Ban sunglasses. He had bought them for his whole family for Christmas one year but his sister had exchanged hers for some stupid perfume. He had thought it was a practical gift. His sister was never practical about anything.

She had suggested that things we love are not always practical and that they do not always make sense.

She saw him-or parts of him-everywhere. When it wasn’t the subway it was the bus. She glimpsed his nose behind a New Yorker magazine on the M11. It looked longer from the left side.

She saw the back of his head rushing to board an F train at the West 4th station. He worked in that neighborhood after all. Maybe he’d grown his hair out a little. It fluttered around his ears. Not grey. Never grey. No man in his family ever went grey. They all had perfect vision and thick dark hair until they died.

She couldn’t be sure, but one rainy day in April she was certain she saw his knees at Washington Square Park. It was raining just enough to open an umbrella, but the sudden warm air and smell of wet pavement and magnolia blossoms made you never want to go inside again. He was seated on a park bench reading. It was just like him to sit on a park bench under an umbrella in the rain like it was the most natural thing to do. Hey, it was dry under there.

They had met up in that same park more than a year before. She wanted hot chocolate and he stopped to buy two bananas from a street vendor first. At the café she blew into her mug. He offered her his banana. She giggled, No, thank you. She asked if he would like to dip it in her hot chocolate. For a second, two 30-year-olds, one of them a rather distinguished academic, dissolved into rich ripples of laughter. She put her hand over her mouth. He pressed his lips together tight and looked at the floor, but the crinkles around his eyes deceived him.

It was one of the last times they had been together when she still felt hopeful.

They disintegrated over and over again. He would say something and she would hear everything else. She tried to explain that sometimes she saw the world through a filter and maybe that made life more beautiful.

He said he understood, but that he could not agree. If she couldn’t see him for who he really was… well, sorry.

So she resolved to stop seeing him.

Which is exactly what happened. She saw him again and again. In pieces.