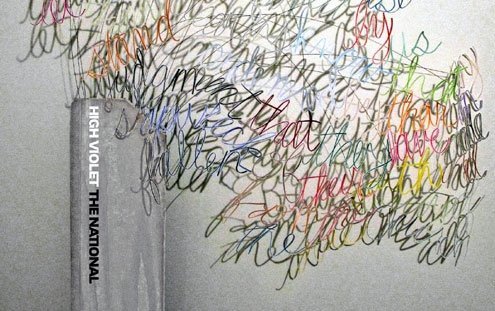 The National's fifth is titled "High Violet" (4D).
A

s with all art, music is a means of communication. The message can be personal, political, or just aural. Equally interesting is how people react to different kinds of music, and how they discuss what compositions or songs mean to them and what they think they might mean to the public. Increasingly, what listeners talk about gets at least as much coverage as songs and recordings themselves. In other cases context doesn’t get the attention it deserves.

THE FIRST is The National, a Brooklyn-by-way-of-Cincinnati indie-rock quintet that has received considerable attention — nearly all of it positive — for their fifth album, High Violet (4AD). The band is composed of baritone singer Matt Berninger and two pairs of brothers, the Dessners and Devendorfs.

The commotion is surprising, mostly because The National seems is so needlessly divisive. Fans are quick to talk about Berninger’s distinctive delivery and sardonic lyrics (increasingly serious on this album) or Bryan Devendorf’s powerful drumming; detractors find the music as boringly straightforward as one could expect for “indie-rock.” They’re on different sides of the same debate.

Clashing over The National isn’t about the quality of High Violet versus older albums like Boxer or Alligator, or even about the merits of the band itself, but about how we listen.

WE’RE NOT just talking about music when we’re talking about the latest offering from one of the best purveyors of music from far-off lands, Sublime Frequencies. The Seattle-based record label’s release of Ethnic Minority Music of Northwest Xinjiang, China feels appropriately timed for a lot of reasons. On a micro level, Sublime Frequencies has dug deep in the past to uncover sounds both old and new from Southeast Asia, North Africa and the Middle East. This is a refreshing change of geography.

On a macro level, it could mark the start of a shift among labels that focus exclusively on ethnic sound. Thanks to Sublime Frequencies, Soundway, Honest Jon’s, Soul Jazz and other labels, the market is awash with compilations chronicling Brazilian post-punk, Thai all-girl garage and Ethio-jazz.

It seems surprising that these labels haven’t produced the same number of compilations from prominent and ethnically-diverse China. If the labels can’t explain the oversight, perhaps the blame lies with Chinese authorities.

Either way, this rich compilation comes courtesy of a couple preparing for marriage in Xinjiang shortly before the Uyghur uprising last July. Nine artists are present on these 17 songs, including Kazakh two-string dombra player Kurmanjiang Zaccharia and Uyghur muqams, a regional melody type.

English-language information on these styles is almost impossible to come by, but music aside, it’s the recordings themselves that provide the inspiration. As China wrestles with its new role as a global power player, one hopes that access to the rich musical histories of the country’s minority population’s will also grow.

THE MOST exciting kind of release unites those that only want to talk about the music with those that only want to talk about what the music means. Janelle Monáe helps merge the debate in spectacular fashion with her debut studio album, The ArchAndroids (Suites II and III) (Wondaland Arts Society/Bad Boy). The Kansas City, Kansas native adheres to a sci-fi aesthetic as her songs drift between R&B, soul and funk, and indie-pop/rock. Monáe possesses a chameleonic intuition for getting her voice to sound natural over so many different styles.

ArchAndroids provides something for everyone — even orchestral fans can warm to the two overtures. Admired despite her slippery persona, she continues a rich history of artists that appeal both to fans of a single genre and the more open-minded: Kelis, Santigold, Ciara, and Erykah Badu (with whom Monáe has recently been touring) are recent examples. It’s not for nothing that she debuted at #17 on the US Billboard 200, though.

Songs like “Sir Greendown” and “Make the Bus” are light and poppy numbers, while “Tightrope” angles for the hip-hop audience. You never know what to expect song to song. Though that can wear a listener down over the course of 68 minutes, her cohesiveness and message ultimately make up for it.

At 24, she’s clever enough to let her music and message stand alone while everyone else does all the talking. Music critics would do well to be so clever.